Gunfight Friday: Rimfires of the 1950s

This week we’ve got another pair of fun .22 rifles from the 1950s. The Winchester Model 77 was introduced in... 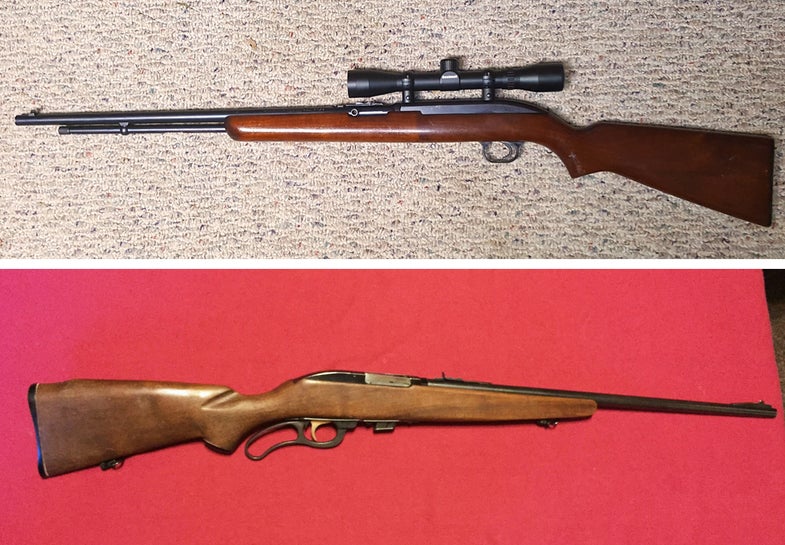 The Winchester Model 77 was introduced in 1955 and discontinued in 1963, which should be a clue to anyone wondering about its quality. The year of 1964, of course, was when the music died for Winchester. The old Winchesters went away and new, cheap models were introduced in their place. Think of the nicely machined Model 77 as a pre-’64 semiauto .22 rimfire. It came in both box and tubular magazine versions.

The Marlin Levermatic was modeled after the Kessler Lever-matic shotgun. After Kessler went bankrupt, Marlin engineers studied and licensed the short-throw lever design and adapted it for this slick little hammerless rifle. The lever throw was only about an inch and a half, so you could keep your hand on the grip while cycling the action and spit out rounds at almost semiauto speed—hence the name Levermatic. It was made from 1955 to 1965 in .22 LR, and from 1959 to 1969 in .22 WMR. The Model 56 had a box magazine; the Model 57 had a tubular mag.

I have for your approval a .22-caliber Marlin Model 56 Levermatic. It’s a handy rifle and fun to shoot. For those not familiar with the workings of this model, it’s a short-throw lever action, needing only a flick of the fingers to cycle the action, which can help for quick follow-up shots. It has a seven-round box magazine. It was my grandpa’s gun, and now it is mine, and hopefully it will be my son’s someday.

Unlike many Gunfight Friday submissions, this Winchester Model 77 has not been in my family for generations. I stumbled across it in a pawn shop whose owner had little idea of its value. Being a Winchester fan, the rifle was a deal I couldn’t pass on. It’s topped with an inexpensive Bushnell 1x scope that is good enough for controlling the critters that like to raid our garden. Mine is the tube-fed model, which sets it apart from many Model 77s. Although it has not been passed down through our family tree, I plan on beginning the legacy once my son is old enough to appreciate it.

There is your choice, which is not an easy one this week, if you ask me. Vote and comment below, and keep the gun pictures coming to fsgunnuts@gmail.com