Today’s Gunfight is slightly asymmetrical, pitting a handgun against a carbine, a .357 against .44 magnum. The .357 gets a... 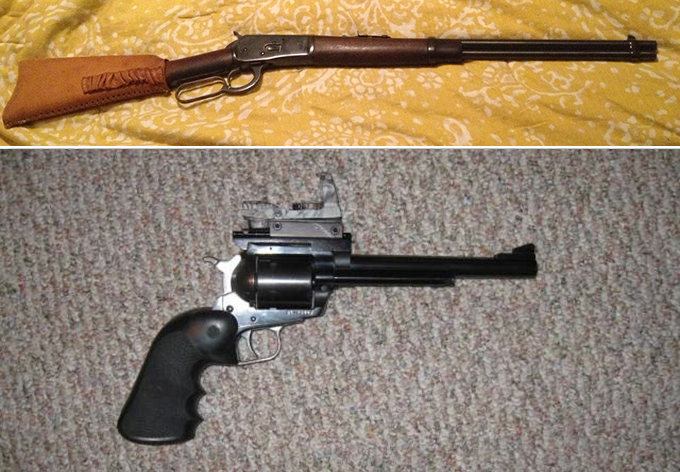 Today’s Gunfight is slightly asymmetrical, pitting a handgun against a carbine, a .357 against .44 magnum. The .357 gets a velocity boost from the carbine’s longer barrel, leveling the ballistic playing field somewhat as it goes up against the .44. Both of these guns came in a while ago in response to my request for hog guns, and either would be suited to that job. Through sheer coincidence both owners live in Wisconsin where there are no feral hogs. There is not much joy in Wisconsin, either, as the Super Bowl nears. I assume the guns’ owners are, as I am, emotionally shattered Green Bay Packer fans in need of some distraction this weekend. I hope this Gunfight helps.

I bought this one in 1998 when I was stationed in Texas. She was made before Rossi added that nasty, plastic “lawyer safety,” and if I hold the trigger, the hammer comes back without a making sound. My garage-molded, wheel-weight, 160-grain cast lead bullet over a whole bunch of ‘Lil Gun powder leaves the 18 ½-inch barrel at an honest 1900 fps. My girl has taken coyotes, jackrabbits, and ground squirrels in New Mexico; hogs in Oklahoma and Texas; and groundhogs, possums, raccoons, and a couple of big whitetail does in Wisconsin. And even though she’ll tube 9 rounds (10 if I chamber one), I’ve never had to send more than one. Accuracy is good enough (2 to 2.5 inches at 50 yards) for anything I’ll use her for. Other than a trigger job (she used to require a come along and chain to send a round down range) I’ve done nothing to her. She’s my go-to when I roam the southern Wisconsin woods, and on those days, my only fear is getting home to a cold dinner.

I know you asked for a pig gun, but we don’t have wild pigs in Wisconsin. What we do have is deer, and sometimes we have to hunt them with shotguns or handguns. I discovered this was as accurate as a shotgun—and much more maneuverable in a stand. The terminal ballistics approximate a 20-gauge foster slug. I took about a dozen deer with it before we were allowed to use rifles rifles. It’s a Ruger Super Blackhawk with Hogue grips and an NcStar reflex sight. I think it would work fine on hogs.

There’s your matchup: Winchester Model 92 copy in .357 versus a Ruger’s venerable single action revolver in .44 magnum. Choose your pig poison by voting below, comment lucidly, and send more gun pictures to fsgunnuts@gmail.com.