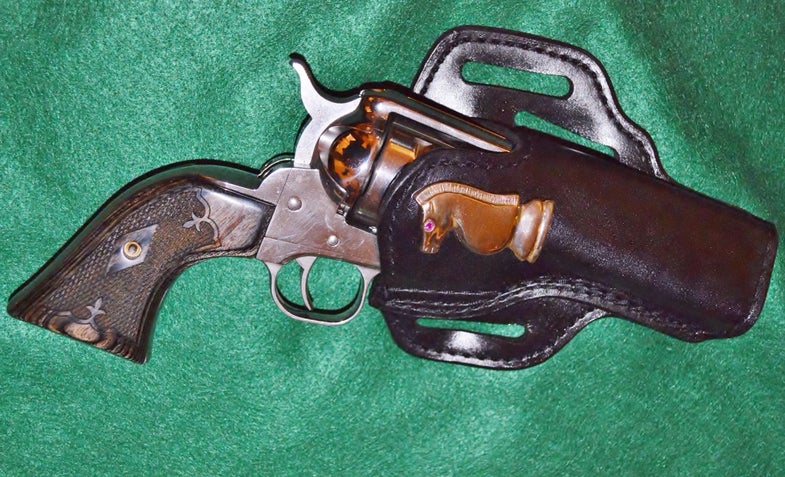 It’s a .45 caliber Gunfight Friday—.45 ACP vs. .45 Colt—and two very classy, very different guns to shoot them. The .45 Colt, or Long Colt, dates to 1872 and was the Army’s service cartridge during the last quarter of the 19th century. Unfortunately, the .45 Colt was retired in favor of a Colt .38 in time for the Moro Rebellion in the Phillipines. The new .38s were soon found to put inadequate holes in determined Moro warriors, and that experience led the military to begin its search for a new sidearm chambered for a .45 caliber cartridge. They settled on John Browning’s 1911 and the .45 ACP, and the rest is, of course, history. Both of today’s guns serve as carry guns for their owners from time to time, because who wants to be carrying something smaller on the day you run into an angry Moro warrior?

Vic F’s Kimber
This is a Kimber Elite Carry 1911 in .45 ACP. The Elite Carry was a limited production that Kimber sold as a prelude to their CDP line. Only 1,200 were manufactured in 1998 to 1999. I love this gun. It has the complete carry treatment: Officer model 1911 frame, melded edges, front and back strap checkering, night sights, ambidextrous safety, grip safety, Commander hammer, and rosewood grips. It’s more accurate than I am, and I’m pretty good with it. The trigger is simply beautiful to pull. Recoil is very manageable. I carry it often, even though it is a little heavy. With a good leather belt I have no problems carrying it.

Tim’s Ruger
I bought this about the time Ruger first came out with the Vaquero. I like the balance and action. I have been known to use it for concealed carry. I have to admit that from time to time I get the John Wayne bug. One might say my formative years were highly occupied with television westerns. I watched everything from “Have Gun Will Travel” to “Gunsmoke.”

There are you choices.Vote and comment below, and keep the gun pictures coming to fsgunnuts@gmail.com.

Which gun would you rather have?