Today’s gunfight pits a couple of single-shot rimfire rifles against each other. You can debate whether you become a better... 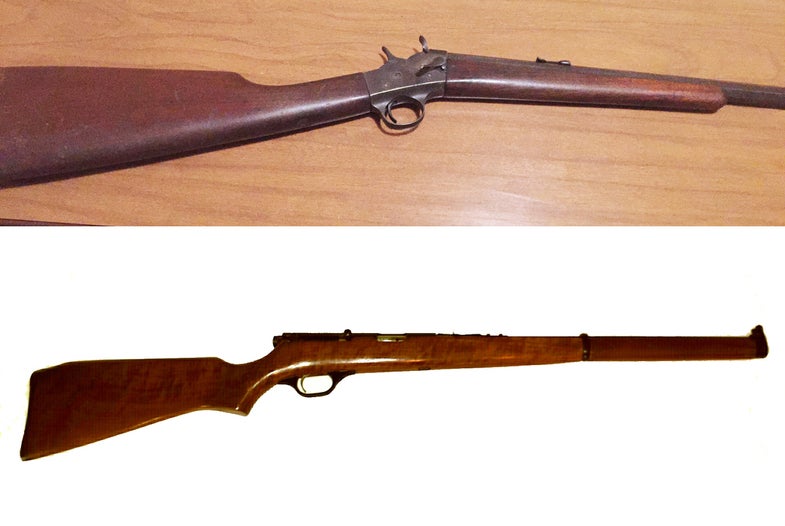 Today’s gunfight pits a couple of single-shot rimfire rifles against each other. You can debate whether you become a better shooter if you start out with a single-shot rifles instead of a banana-clipped 10/22, but it’s a fact that, for years, people learned with single-shots, and those old rifles have a lot of nostalgia appeal.

About 350,000 Remington Model 4 rolling blocks were made from 1890 to 1933; that’s the takedown lever on the side of the receiver. The H&R 755 Sahara had a straight-pull bolt, which would blow back to eject the empty. Depending on your view of these things, it combines either the advantages or the disadvantages of a semi-auto and a single-shot all in one rifle. It was made from 1963 to 1971.

This is a Remington rolling block Model 4 takedown I inherited. It’s in pretty good shape and is chambered for .22 short and long. It’s a very light and handy little gun. If my eyes were good enough to shoot with iron sights, it would be pretty accurate, too. It’s been in our family since at least the 1940s, since it was new, probably.

This is my Harrington & Richardson Model 755 Sahara. I first saw the ad for this peculiar little .22 rifle in a 1963 issue of Guns Magazine_—the ad caught my eye but I figured I’d never see one. And that was okay by me because I don’t need every weird little plinker following me home. But then I ran across a mint specimen in a pawn shop not a week later. Now, if that’s not meant to be, you tell me. Anyhow, this is a cool rifle; it’s quick to shoulder, the sights are surprisingly easy to pick up, and it eats everything since it’s a blowback self-ejecting single-shot. But it doesn’t owe me anything, it still looks new—helluva beautiful walnut stock on it—and it still rides out to the range with me every so often. I’ve never regretted this purchase._

You know the drill. Vote, comment below, and keep the gun photos coming to fsgunnuts@gmail.com.