Today’s Gunfight pits two semiauto rifles up against one another: the Soviet SKS against the American Mini-14. Both are gas... 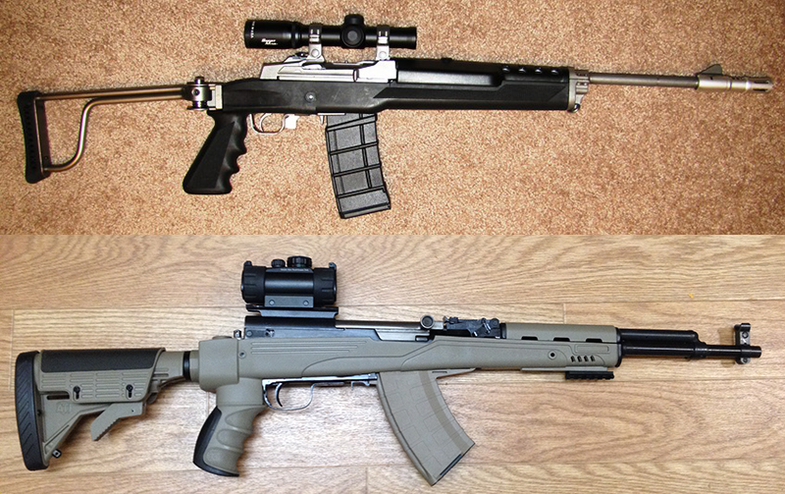 Today’s Gunfight pits two semiauto rifles up against one another: the Soviet SKS against the American Mini-14. Both are gas operated, and each one fires the service cartridge of its respective nation. The SKS is chambered in 7.62×39; the Mini-14 for 5.56.

With over 15,000,000 made, the SKS doesn’t need much introduction. Put intro service in 1945, it was quickly replaced by the AK-47, but it remained in use into the ’80s and has been a popular surplus rifle and a deer hunting rifle for some.

The Mini-14, introduced in 1973, has also been made in large numbers. The rifle is patterned after the M14 service rifle, but scaled down to .223 size. To me it will always be the rifle of the A-Team, but to thousands of owners, it’s a varmint rifle, a truck rifle, a home defense rifle, a plinking rifle, and much more.

This is a Ruger Mini-14 I bought from a friend who was going through a messy divorce. It has a Butler Creek folding stock, aftermarket 30-round magazine, and a Burris 4x scope. It isn’t the most accurate .223 I’ve ever shot, but ranch rifles aren’t meant to be. The trigger is fairly typical of the semiauto triggers I’ve experienced—it has some creep to it, but it resets quickly. I’ve shot a few coyotes and woodchucks with it. It’s American-made, fun to shoot, and if ISIS invades the Midwest I’ll be waiting for them.

This is my Norinco SKS in 7.62×39. I bought it used last year really cheap but in pretty rough shape. With all of the original furniture gone, I decided to see what I could do with it. I replaced the black Monte Carlo stock someone had installed with this ATI Strikeforce stock. After grinding down a small edge on each side of the bolt I can now insert and remove duckbill magazines with the bolt open or closed. The bayonet lug had already been removed from the barrel, so I cut it down to 16.5 inches and re-crowned, again using a Dremel tool. The rail for the red dot is mounted high so I can still use the open sights. I had to replace the front sight assembly as well as the trigger block safety, as both were missing. The red dot is a cheap UTG I threw on there, just to try it out. There are many who are no doubt cringing and cursing my ancestors for such wanton destruction of an SKS from its original and intended form. But I have found that with these modifications I am able to control the rifle really well. I was even able to get a tin can to dance for the first time in my life earlier this year. With a 5-round magazine this makes for some lethal medicine for javelina and coyotes running around southern Arizona, and the 20-round Tapco magazines are a lot of fun at the range.

There are your choices. Incidentally, both these gun owners took excellent pictures of their entries. The pictures are horizontal, sharply focused, and they show the whole gun. That’s what we like to see here at Gunfight Friday. Cast your vote, make your comments below, and keep the gun pictures coming to fsgunnuts@gmail.com.