Nothing fancy about either of today’s guns, but each, in its way, is very cool. Both are small-game shotguns, one... 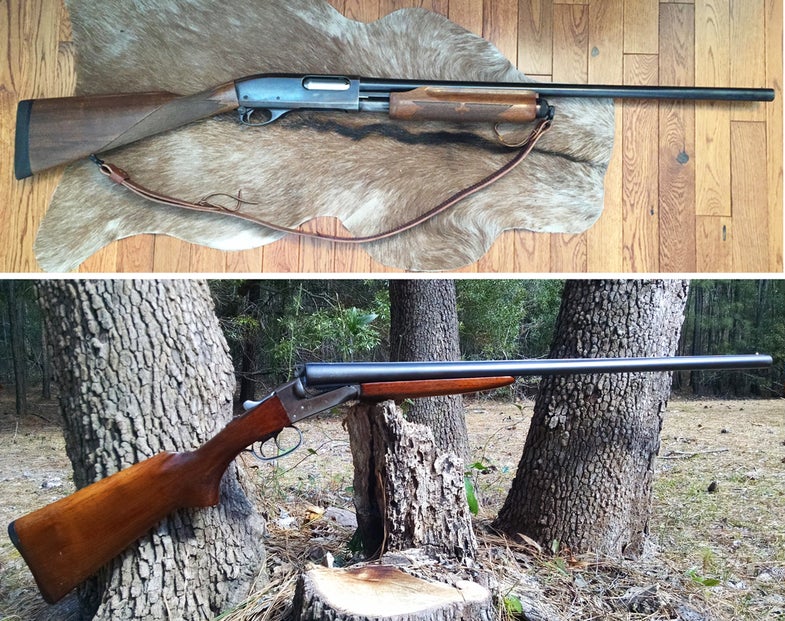 Nothing fancy about either of today’s guns, but each, in its way, is very cool. Both are small-game shotguns, one a 12 gauge, one a 16.

The first is an inspired hybrid. Some genius put the straight stock* of an 870 Special Field on a 26-inch plain barreled Wingmaster. Those plain barrels are light and lively, and the straight stock makes the whole package even sleeker and better-handling. Then they hunted with it a ton to give it that patina of use that makes the new stock blend right in.

The second is a gun I wish we still had, an affordable—even cheap—American double gun. Chances are, we’ll never see one again. Springfield was a Stevens’ value brand. And Stevens itself was a value brand of Savage, more or less. Even so, this particular gun is going strong 60-plus years after it was made.

A week after I turned 18, I bought this 870 Wingmaster from a local gun store full of clunkers and antique firearms (the kind of shop I like). I’d been eyeing this particular Wingmaster because it had the English stock off a Special Field 870 and a nice Pachmayr recoil pad. It also had an attractive price: $325.

This 870 has seen a lot of use by someone, and the bluing has a good bit of wear on the bottom of the receiver. It’s a 12 gauge, with a fixed improved cylinder 26-inch barrel. I’ve used it to hunt squirrels, and have loaded it with buckshot a couple of times during deer season. If only I could find some quail or grouse, I’d be set.

The first is my grandfather’s old 16 gauge side-by-side. I assume it’s a Savage shotgun because the receiver is stamped Springfield J. Stevens Arms Company. Truthfully, I don’t know the history of American shotguns very well, so I’d love to hear if others know the background.

My grandfather and uncle used it in the ’50s and ’60s when Pennsylvania still had wild pheasants. It sat in an uncle’s closet for probably 20-plus years before my dad talked him out of it two years ago. We’ve taken it to the trap and skeet field for fun, and it’s gone out after pheasant and dove, though I have yet to get it back up to Pennsylvania for grouse. I love that it’s a family gun and an American-made double.

Either one of these guns would be great for small game and birds, and both are, in ways, minor classics. I’d like one of each, myself, but you guys have to choose, vote and comment below, and keep the gun pictures coming to fsgunnuts@gmail.com.

*I dislike the term “English stock.” They make all kinds of stocks in England, including straight—or “straight hand” if you must—stocks without any kind of pistol grip, of which this is an example.