Thanks to everyone who sent in pictures in response to the recent pledge drive, I’ve got some dandies in the... 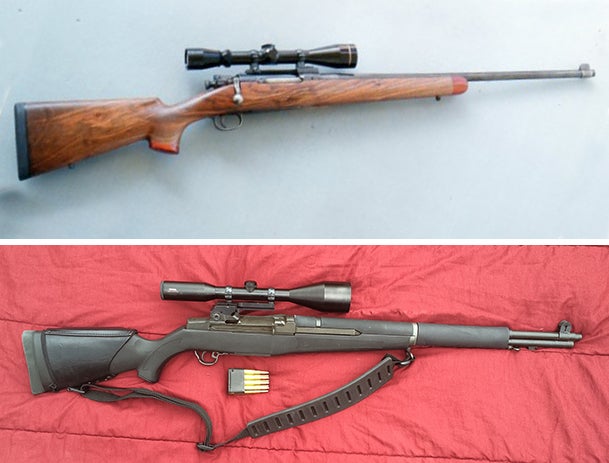 Thanks to everyone who sent in pictures in response to the recent pledge drive, I’ve got some dandies in the inventory that should keep us going for a while, and in good style, too. Today’s fight is between a pair of sporterized surplus rifles: a 1903 Springfield and an M1 Garand. Neither rifle needs much introduction to this crowd, the 03 Springfield having served the US military in both World Wars, while the M1 was one of the great weapons of World War II and its semiautomatic action gave our soldiers and marines an advantage over opponents armed with bolt-actions.

The ’03 Springfield was the basis of many, many sporterized and custom rifles. Sporterized M1s are much rarer and we’re fortunate to have one to discuss this week.

Here is my sporterized Garand in caliber .270 Winchester. I bought a traditional rack grade Garand rifle from the Civilian Marksmanship Program and enjoy plinking with it. I noticed that they were also selling stripped Garand receivers, so I bought one of those too and built it up into this deer stand rifle.

The receiver is a Springfield and was badly in need of re-parkerizing. I got a great deal on eBay for a .270 Win barrel in the white, but getting it mounted was harder than I anticipated. A .270 bore is too narrow for the draw-through reamers used by most Garand gunsmiths. Most traditional gunsmiths won’t touch Garands. After a lot of looking, I finally found an excellent gunsmith, Mike Orwan, who knew Garands and who could mount the barrel and headspace it using a traditional reamer to a bolt I supplied. Mike also did a great job parkerizing the barreled receiver.

I assembled the rest of the rifle myself using parts that are correct for a Springfield Garand in its series number range. I did install an aftermarket adjustable gas system so I could shoot commercial ammo without damaging the rifle. I also bought a commercial scope mount and a cheap 8 power scope with a big 56mm objective bell. I had to mount the scope sideways so that the adjustment knob wouldn’t interfere with loading the rifle. I bought a reproduction Garand sniper leather cheek riser and dyed it black to match the commercial plastic stock.

I’ve had it in the stand a few times, but haven’t had the chance to try to take a deer with it. Hopefully I’ll get a chance this fall!

This is my Springfield sporter, custom stocked in New Zealand walnut with a rosewood forend tip. It is a high-numbered 1903 Springfield Armory rifle that I had picked up on the cheap because it had already been sporterized with a junky stock back in the 1950’s.

The action is as slick as oiled glass, and it is very accurate. It is glass-bedded, has a Dayton Traister safety and a Pachmayr recoil pad. With scope, it weighs 9 1/4 pounds. As you can see, I have not yet had it checkered.

The metal work on the ’03 Springfield has an aura of quality about it, and in the 1930’s and 1940’s, it was a natural choice for custom rifle-builders and their clients. A great favorite of the rich and famous, it went along on many an African safari as “the light rifle.” Teddy Roosevelt owned one, as did novelist Ernest Hemingway and others.

There are your choices. Have at it. Vote and comment below, and keep those gun pictures coming to fsgunnuts@gmail.com. Where else do you get free entertainment this good every Friday?