Today’s gunfight celebrates a growing trend: Some states that formerly allowed only shotguns and muzzleloaders for deer have liberalized rules... 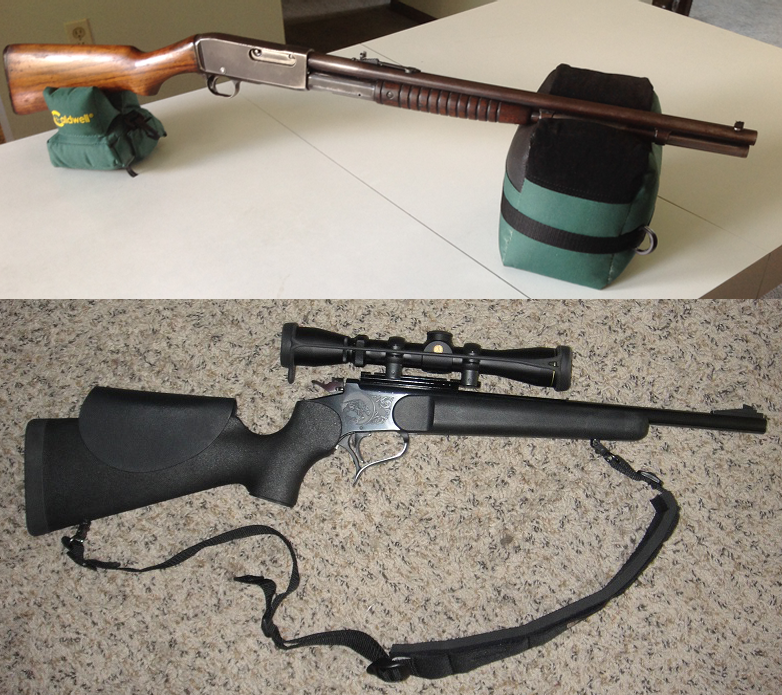 Today’s gunfight celebrates a growing trend: Some states that formerly allowed only shotguns and muzzleloaders for deer have liberalized rules to include rifles firing certain straight-wall centerfire cartridges. One of these two carbines is modern, worked-over, and Indiana-legal; the other is an old classic that complies with Ohio law.

This was my grandfather’s deer rifle, a Remington Model 14 1/2 in .38-40. It sat in an attic for more than 40 years before I got my hands on it. As you can see, it has some wear on it, and the wood needs some work but it still shoots spot on at 60 yards—even if you can hear the bullet thunk as it hits the target. My grandfather took many a buck with this rifle in the mountains of south central Pennsylvania. Remington has dated the manufacture of this rifle as circa 1914. Ohio has allowed for straight-wall cartridges for deer this year, and I am seriously considering hunting with the .38-40 this year.

This is my Thompson/Center .35 Remington Super 16 (16.25 inches). It was a tough gun to shoot offhand until I added 7 or 8 ounces of lead shot to the hollows in the forend. The factory buttstock was too low, so I made a cheek piece from .090-inch Kydex and attached it with Velcro. Indiana law specifies deer cartridges must be a minimum of .35 cal min with a case length of 1.16 to 1.8 inches, so this legal after I trim the case necks. The gun shoots right a 1-inch group at 100 yards with handloaded 200-grain bullets.

There’s your choice: Would you rather try to fill a tag with a venerable .38-40 pump action or a modern, scoped single shot in .35 Remington Super? Vote and comment below, and keep the gun pictures coming. Thanks to all of you who sent pictures last week, including CD2 and Harold. Keep them coming, please.