This week we have a Gunfight Friday first: a tag-team matchup. In one corner, we have a pair of hog... 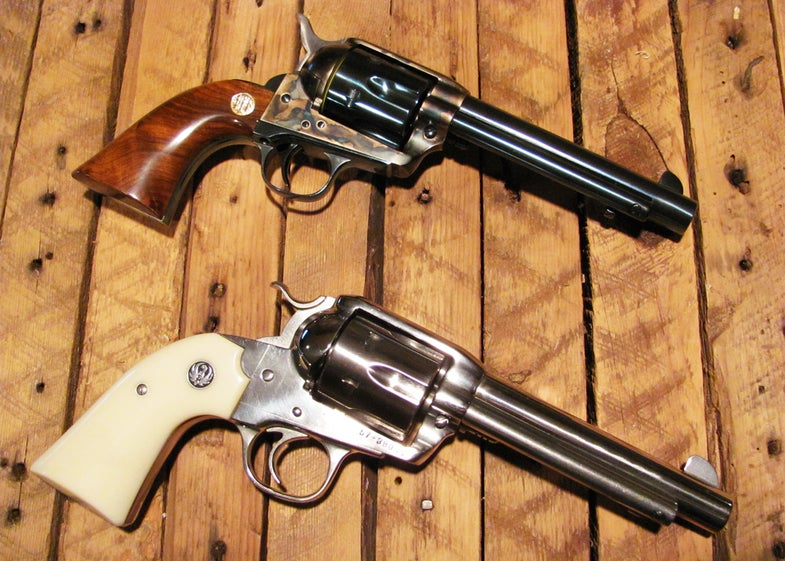 I know it's not antique or collectible yet, but it sure is pretty to me. Reader Submitted
SHARE

This week we have a Gunfight Friday first: a tag-team matchup. In one corner, we have a pair of hog rifles; in the other, two single action .45s. Occasionally, people send me pictures containing more than one gun that don’t fit the “two guns enter, one gun leaves” format of Gunfight Friday. I am, however, always looking to get the most out of the photos people send me. So, rather than punish rule-breakers by making them languish forever in the GFF inbox, I’m rewarding them by putting their guns in our first-ever Gunfight Friday tag team matchup. We’ll see how it goes.

We have a pair of pistols—one for each hip, maybe—inspired by the Colt SAA, and an odd couple of hog rifles: one very traditional, one very modern.

The bolt-action rifle is a Westley Richards, built on a Steyr Mannlicher-Schonauer action in 1913. Westley Richards called it a .256, but it’s more generally known as a 6.5×54 Mannlicher Schonauer. The WR has three-leaf folding express sights for 50, 100, and 300 yards.

The other rifle was built by DPMS last year. It’s chambered in .308 and has a Leupold 2×7 scope.

I have been on the lookout for an original 1800s Colt for a while now. In the spirit of that, I have also been on the lookout for some nice modern-day replicas of the Single Action Army that would be fun to shoot. I got the pair of these out of a collector’s fleet two years ago for a steal of a price. He had several companies’ renditions of the .45 LC, but the two that caught my eye the most were the Ruger Vaquero Bisley (stainless with ivory grip) and the Beretta Stampede (case hardened and wood grip). The Ruger has become a regular side arm for me while archery hunting in the North woods, or while just walking and scouting the property, and has blown up countless water jugs, as well. I bet there are a whole lot of guns that would serve as better deep-woods protectors from bears and coyotes, but the threat from either of those is really quite small in our area, and I do what I want, which is pretend to be a cowboy when no one is looking. The Beretta, on the other hand, had not yet been fired as of my date of purchase, and has remained that way since. I know it’s not antique or collectible yet, but it sure is pretty to me, and I have the heavier Vaquero to shoot, so this one will remain on the shelf for the time being. And to think, I said I would never buy a gun just to look at it.

There are twice as many guns for you to comment on and vote for below. Keep the pictures coming (one gun at a time, please) to fsgunnuts@gmail.com.