In today’s Gun Fight we’ve got a pair of target shotguns. Both are sporting clays guns and I am doing... 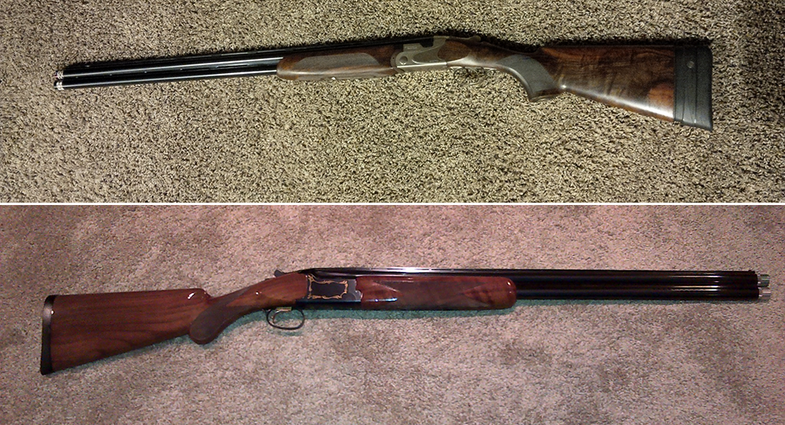 In today’s Gun Fight we’ve got a pair of target shotguns. Both are sporting clays guns and I am doing this because two brothers-in-law requested it, and at Gun Fight Friday we take requests. Also, I really like target guns.

Really, there’s not a lot to choose between in this battle of “B” guns. Browning’s Citori is a simplified version of the classic Superposed that John Browning invented back in the Depression. The Prevail, despite its modern styling, is built on the same sturdy action Beretta O/Us have used since the 60s.

Gunwriters like myself often point out that Berettas are shallower through the receiver than are the taller Brownings, so the Beretta sits lower in your hands and points more naturally. Theoretically it does, but I find I can shoot a tall Browning just as well – or as badly – as I can shoot a low-profile Beretta.

Attached is a photo of my Beretta SV10 Prevail III 12 Gauge Over/Under. I am hoping to square off against my brother in-law’s Browning Citori. We often shoot together and joke about which gun is better and both felt maybe a Friday gun fight would be fun.

I purchased this shotgun just over four years ago when I turned 40. I told my wife that I was going through a mid-life crises and could not decide if I should go for a new sports car, a girl friend or a new shotgun … she thought the shotgun was a great idea. It has 30-inch barrels as well as Beretta’s Kick-Off recoil reduction system and some very nice wood grain in the stock.

The gun shoots wonderfully (better than me), but it has not been trouble free. After my first shoot (sporting clays with Paul), it developed a crack in the butt stock from the safety area down towards the trigger. It took about six months for my new stock to arrive and be fitted to the gun but luckily for me its wood grain was as nice as the original.
P.S. Paul…..Loser buys lunch next shoot.

This is my Browning Citori Lightning Sporting. I have been fortunate to shoot with my now brother-in-law, Jeff, for quite a few years now. We enjoy shooting trap, sporting clays and the occasional grouse. I believe that I introduced him to trap and clays. I did my best to convince him to buy a Browning but he went with a Beretta. Turns out he is quite a good shooter and the Beretta doesn’t seem to handicap him in our friendly competition. Anyway, my Citori fits me like a favorite pair of boots so I hope to be giving him a hard time with it for years to come.

There’s your matchup. If it makes a difference to your vote, Berettta’s Kick-Off reducer does work. Otherwise either gun will break clays all day long and it comes down to Browning vs. Beretta. Also note the excellent job by Jeff of framing the intended purchase of a new gun to his wife as the least of three evils. We can all learn from this. Anyway, vote, comment and keep the gun pictures coming to fsgunnuts@gmail.com