Today’s Gunfight is a throwback throw-down between a pair of traditional muzzleloaders. One is a percussion rifle, built more or... 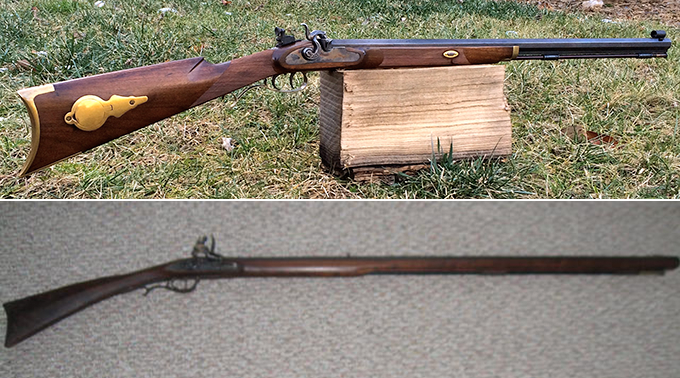 Today’s Gunfight is a throwback throw-down between a pair of traditional muzzleloaders. One is a percussion rifle, built more or less in the style of the mountain men’s Hawkens. The other is a flintlock long rifle, with traditional, elegant lines. One is deadly, the other something of a hard-luck gun and an ongoing project. Here they are:

The Thompson/Center Seneca is a scaled-down version of the more common T/C Hawken rifle. My rifle’s bore diameter is .45 caliber, though this model was also made in .36 and a few in .32 caliber. These rifles went out of production about 20 years ago, though they seem to be in greater demand now than while in production. This one sat in my safe for years until I stumbled onto a somewhat rare tang sight that Thompson/Center made for this rifle. It was a game-changer for my 50-plus-year-old eyes. The Seneca now displaces a more modern in-line as my favorite muzzleloader for deer hunting. Yes, I do sometimes miss a scope, but not too often.

When I handle this rifle, it’s hard to see why this model wasn’t more popular while in production, for it is trim, lightweight, and extremely well balanced. Perhaps it didn’t sell better because the .45 caliber is often perceived as too light for deer-size game? This one likes the 40-caliber, 200-grain Hornady SST bullet in a sabot. Like many sidelocks, it also prefers black powder to any of the substitutes. It likes to be cleaned often, too. The chronograph shows an average velocity of approximately 1,700 fps with 75 grains of FFg, which has always taken deer cleanly. When the bore is patched between shots, groups are typically four inches or a bit less at 100 yards—more than adequate for deer.

This is a .50-caliber flintlock that an acquaintance built with a Hatfield barrel and lock, walnut stock and brown furniture. I traded something that was worth more than this rifle but I hadn’t paid much for. My friend got the better of the deal. I did get a good, well-crafted rifle though. In spite of the craftsmanship, it has had its problems. I got careless and broke the stock at the wrist. I was referred to a tool-and-die maker who very carefully and skillfully drilled the length of the butt to the lock and epoxied a piece of fiberglass ramrod in place just like in the old days. You would have to know where it was broken to find the line. He did this in a couple of days in time for the season and asked if $20 would be OK. After all that I didn’t kill anything. Then the mainspring broke. Track of the Wolf said to send the lock and they could probably find something that would work or a new lock. I never got around to it. About 15 years later I was reading up on tool steels and it occurred to me that this wasn’t rocket science. Guys in log cabins built these things with a hammer and a hot fire. I took it to a metal shop where they can weld better than I can. We collaborated on a plan and what do you know? The new spring made sparks when I pulled the trigger. The welder thought that was kind of interesting but he had to charge something or the boss would have words for him. Yup, you may have guessed. Would $20 be OK? Still haven’t killed anything with it. Maybe next year.

There are your rifles, and there’s a lot to choose between: .50 vs .45, flint vs. percussion, long rifle vs. Hawken style, home-made vs. store-bought. Enjoy.

By the way: Tom, in reaction to last week’s belt-buckle-.22-vs-Sears-pump fight sent several photos and wrote: “OK. I feel sorry for you. You really seem to scraping the bottom of the barrel. See if you can work with these.” Thanks, Tom, and that is a good reminder that Gunfight Friday depends on all of you. I am just the photo-sorter. Vote and comment below, and send your gun pictures to fsgunnuts@gmail.com.