Marlin lever guns have proved consistently strong contenders on Gunfight Friday, so today we’ve got two: an 1895 and a... 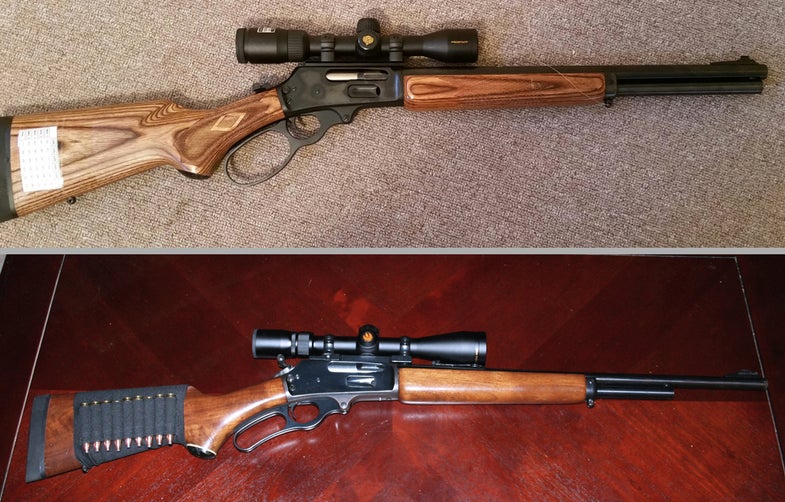 Marlin lever guns have proved consistently strong contenders on Gunfight Friday, so today we’ve got two: an 1895 and a 336, and a battle between two cartridges, the .356 Winchester and the .45-70 Government.

The .356 Winchester was introduced in 1982, essentially to be a .358 Winchester suitable for lever-action rifles. It offered ballistics close to, but a tad slower than, the .358 Winchester. As a cartridge made for rifles with tubular magazines, it required flatnose bullets to operate safely.

The .45-70 Government was designed way back in 1873 as a service cartridge. Unlike the .356, which never caught on, the .45-70 is still popular among hunters who like to shoot big bullets at relatively close ranges, and it has benefited recently from developments, like Hornady’s LEVERevolution ammunition, that improve its ballistics.

A few years ago, I was in the market for another deer rifle, because my nephew was graduating from college and taking an interest in outdoor sports. I had already given him my old compound bow, and, I assumed, he would soon get my old reliable Remington 7600 in 30.06. Then I read an F&S article by the great Dave Petzal, wherein he recommended the Marlin 1895 20-inch-barreled guide gun in 45.70, since it was uncommonly accurate with a big bullet. I bought one and added a Nikon shotgun scope, with Bullet Drop Compensation reticle. If I remember correctly, I picked the shotgun scope because it had only two BDC dots on the reticle, so it would make for easier target acquisition. This is a perfect jump gun for still-hunting. I prefer the cowboy-action shooter ammo, rather than the Hornady plastic-tip specials, since the cowboy ammo has less energy at 100 yards and less likely to tear up a deer. The paper taped to the stock has the printed ballistic tables from Nikon with annotations from actual tests at various ranges. The Nikon program is close but not exact.

This is my Marlin 336, chambered in .356 Winchester. My dad picked it up at a gun shop out East. The previous owner had added a Pachmayr recoil pad and floated the barrel. It also has a very nice trigger pull for a lever-action; usually, they are pretty harsh. The hand loads I use achieve 2500 fps with an 180-grain round, which is all you need for Michigan hunting. I’m not sure why this cartridge isn’t more popular; it hits like a truck but can still reach out to 200 yards.

There are your choices: a mid-bore vs. a big bore, both Marlins. Vote and comment below, and send your gun pictures to fsgunnuts@gmail.com.