Today’s gunfight features two rifles chambered for the all-American .30/06 cartridge. The .30/06 is the 12 gauge of calibers: versatile,... 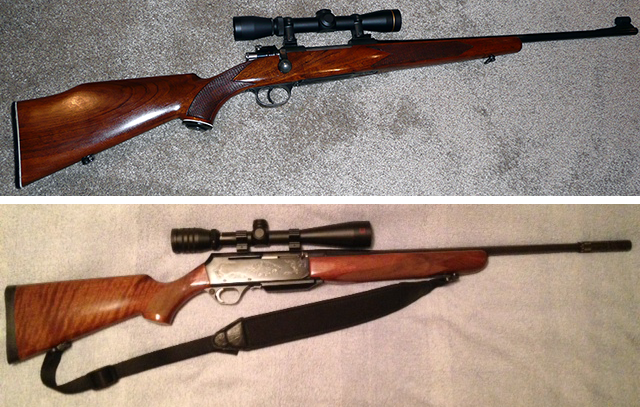 Today’s gunfight features two rifles chambered for the all-American .30/06 cartridge. The .30/06 is the 12 gauge of calibers: versatile, ubiquitous, the standard by which others are judged. If you were to have one hunting rifle, it should probably be an ’06.

One rifle is a bolt-action Parker Hale Safari. Parker Hale was an English gun maker in Birmingham that opened in 1880 and was, for a long time, the largest maker of centerfire sporting rifles in England. Many Parker Hales were built after WWII on various surplus Mauser actions.

Browning’s BAR was introduced in 1967. The gas-operated semiauto is still made today and has a loyal following. The BOSS system on the end of this rifle’s barrel was introduced in 1994. It allows you to tune your barrel’s vibration for a particular bullet weight and, presumably, make the rifle shoot more accurately. I will leave it to all of you with BOSS experience to tell us if it works.

This is my Parker Hale Safari in .30/06. It appears to be built on a surplus Mauser 98 action. It was a wedding present from my father-in-law with whom I have had the pleasure of hunting moose and deer with in northwest Ontario for a number of years now. He purchased it to fend off the bears when working out West when he was 18. It has shot many a moose and deer since. I have only had the opportunity to shoot deer with it so far but one shot has done the trick each time. I’ve found that 180-grain Core-Lokt bullets work just fine. I have refinished the stock, put in a Timney trigger, and mounted a Leupold 2-7 scope. I am looking forward to shooting it for many years to come and passing it on to one of my boys.

This is my Browning Bar. I love this gun. I bought the gun used 10 years ago and have hunted deer, hogs, coyotes, and the occasional bobcat every season. After zeroing the BOSS system to good-ole 150-grain Remington Core Lokts, I can get 1 ½-inch groups all day long. I just changed the scope to a Redfield 4×12. I am ready to put some meat in the freezer this season.

There are your choices. I don’t think you can go wrong with either one, but this is an opinionated group and I’m sure you have your reasons to pick one over the other. Vote, comment, and keep the gun pictures coming to fsgunnuts@gmail.com.