This week we have two turkey guns, one old, one new. The old gun is an interesting artifact of the... 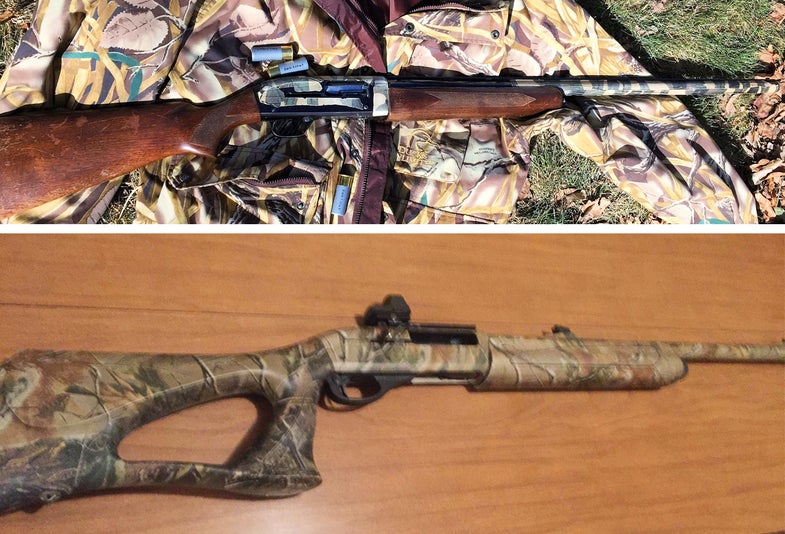 This week we have two turkey guns, one old, one new. The old gun is an interesting artifact of the search for a better semiauto shotgun. The Winchester Model 50 featured the floating chamber invented by David “Carbine” Williams, the moonshiner who began working on guns in prison (and was the subject of a movie starring Jimmy Stewart). It was made from 1954 to 1962. The very next year, 1963, Remington changed semiauto shotguns forever when it introduced the soft-shooting 1100 gas gun. With the addition of a pressure compensated piston, in 1987, the 1100 became the 11-87, which, of course, is still in production. So our second option today is a very modern, deadly 11-87 turkey gun.

Before we dive in, however, I’d like to again point out that great gunfights such as this come to you 52 weeks a year for absolutely free—all I ask for in return are your gun pictures. So keep them coming to fsgunnuts@gmail.com.

This Remington 11-87 had feeding problems at first, but Remington fixed them, and the gun has since become my favorite. The thumbhole stock is great for a long wait, and the Leupold DeltaPoint sight is fast on target. Lots of long beards have gone into the freezer after this gun went boom.

This is my Winchester Model 50 shotgun in 2¾ inch 12 gauge. In my early 20s, I bought it new in the box several years after it was discontinued. It was my first shotgun with which I was able to hit consistently, and it was my main shotgun for many years when most of my bird hunting was either for sage grouse or waterfowl. That said, it’s killed everything from chukars to geese to turkeys. Though it’s somewhat heavy by modern standards, it’s well-balanced and swings nicely. It has an interesting feature in that it has an inertia action where the barrel doesn’t move. Instead, a floating chamber recoils with the bolt until hitting a stop in the receiver. The ventilated rib has two beads, which help me quickly make sure I’m using my right eye to track the birds. As you can see, the gun shows the scars of a lot of field use—the old Winchester varnish isn’t the greatest. But though I now have several other shotguns, the Model 50 still comes out as a spare gun, and I still hunt turkeys with it, hence the camo tape.

There are your choices. Vote and comment below. Congratulations to those of you who have tagged your turkey(s), and good luck to those of you who, like me, have yet to start hunting. And, again, keep the gun pictures coming to fsgunnuts@gmail.com.