With small-game seasons opening soon, it seems like a good time to pair up another couple of .22s. These could... 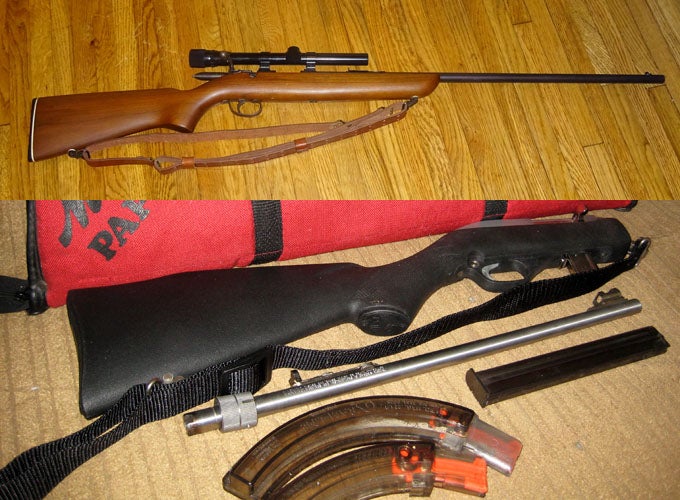 With small-game seasons opening soon, it seems like a good time to pair up another couple of .22s. These could both be called “utility rifles,” as they are inexpensive and one, the Remington 510, is the kind you keep by the back door. The Marlin Papoose is designed to go everywhere.

The single-shot bolt-action 510 debuted in 1939. More than a half-million were made before it was discontinued in 1962. There were other versions, including a carbine and a smoothbore Skeetrap target model. It was never an expensive rifle, and lots of kids learned to shoot with a 510 over the years. The Marlin Papoose is a takedown survival rifle introduced in 1986 and replaced in 1995 by the stainless version we see here. It’s still made today. It’s a very light gun, at just 3 ¼ pounds, intended for campers and hikers.

Here’s what the two owners have to say about their rifles:

This is my Remington 510 TargetMaster .22. This was my great-grandfather’s gun and was manufactured in July 1942. It is a single-shot bolt-action rifle. It can shoot short, long, and long-rifle rounds. It has a Weaver V22-A scope that was mounted on it in the early eighties. I have just recently started target shooting with it and it is pretty darn accurate.

I have taken my Marlin Papoose on many camping trips. By attaching a life preserver to it, I can take it in my wilderness kayak or canoe. It’s easy to put together with the included spanner wrench. It has the low maintenance of stainless and synthetic stock. With the extra magazines I have plenty of shots available, and I get very good accuracy with the iron sights. I bought it in 1995 for $165, and the rifle has had only light use as I have yet to run into any zombies, bigfoot, or attack squirrels. So far.

Two humble, inexpensive rimfires, each very practical in its own way. Which do you choose, and why? And, for extra credit, what is the correct plural of bigfoot: bigfoot, bigfeet, bigfoots, or something else altogether? Vote and comment below, and send in your gun pictures. I am running seriously low. How about some pronghorn rifles? Maybe some dove guns? It’s that time of year. Send them to fsgunnuts@gmail.com.