Today’s gunfight pits two WWII vets against each another: the British Lee–Enfield Number 4 Mark 1 and the Mauser 98k.... 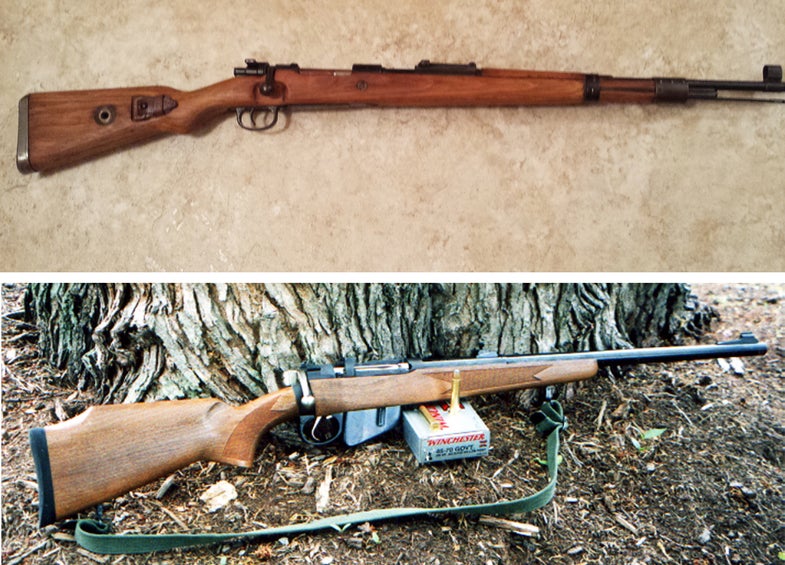 A British Lee-Enfield Number 4 Mark 1 vs. the Mauser 98k..
SHARE

Today’s gunfight pits two WWII vets against each another: the British Lee–Enfield Number 4 Mark 1 and the Mauser 98k. These rifles met on battlefields in Italy, France, Germany, and North Africa, among other places. But both of these particular guns have since been repurposed for more peaceable uses. The Lee–Enfield is an unusual sporter configuration, while the 98k is an interesting trophy and shooter.

This is my Navy Arms Gibbs Summit rifle. It’s obviously a converted Lee–Enfield—and it’s in .45-70 caliber! The Navy made these rifles on surplus #4 Mark I actions, new barrels, and Parker–Hale walnut stocks. They sold very well, but the shortage of actions meant a short production run. Navy Arms told me that about 500 Summit rifles were made, and there was also a variant Frontier, built on the earlier No. 1 Mark III action.

Though sporting conversions of Lee–Enfields aren’t uncommon, they’re usually in the original .303 caliber, but the flat bolt face of the Enfield is well-adapted to the .45-70’s rim. Navy Arms designed a new magazine to handle the fat cases. Lee Enfields in .45-70 are thin on the ground. The Summit is a real bruiser. The No. 4 action is designed to handle pressures well beyond the conventional .45-70 loads, and this rifle is suitable for use on any animal in North America and any non-dangerous game in Africa. Using Hornady’s 350-grain jacketed soft-point bullets over a stiffish load of IMR 4198, I’ve killed deer with it that died so fast they still don’t know they’re dead.

This picture is of my original byf 44 Mauser Karabiner 98k. It was manufactured at the Mauser facility in Oberndorf, Germany, in 1944, and it is Waffen marked. This rifle was a G.I. bring-back souvenir after the war. The Kar98s were too long for the G.I.’s bags, so they needed to be disassembled, and the stocks had to be cut so that they could fit. Because of this, the entire rifle has matching numbers except the stock. Matching number Kar98’s are harder to find, since following the war, many of these guns were re-blued and redistributed to the armies of Eastern European, Asian, and the Middle East. During this process, the bolt actions were separated from the rifle and all the original German stampings were electro-penciled or ground off.

The rifle weighs approximately 10 pounds and is chambered in 8mm. Although it is a high-powered brick, the weight and density of the laminated stock absorb almost all the kick, making it wonderful to shoot—and it’s very accurate. Even at 72 years old, this is one of my best-shooting rifles, and the action is as smooth as butter. However, I don’t think it will unseat my Remington 760 Gamemaster as my primary deer rifle—not yet, at least.

There are your choices: a sporterized .45-70 or a souvenir compliments of the Greatest Generation. Vote and comment below. Thanks to Brock and New River Valley Outdoorsman for the ingredients for another good gunfight. Gunfight Friday depends on all of you, so keep the photos coming to fsgunnuts@gmail.com.