How American G.I.s Stacked Up Against the Germans

Photograph courtesy of David Foster/Flickr I got into this because I just wrote a post on the Battle of the... 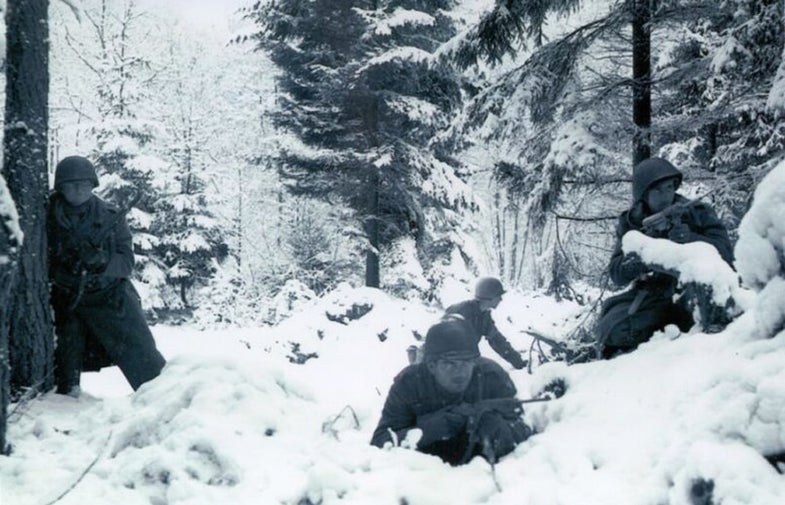 I got into this because I just wrote a post on the Battle of the Bulge, and because I just watched Saving Private Ryan for the 119th time. When I was a kid, you could not have made a movie like that even if it had been technically possible, because it showed some uncomfortable truths about the war that were not mentioned in the 1940s or into the 1950s. The first American film that showed GIs in a less than flattering light was a movie called Attack, which ran in 1956, and which holds up very well today.

Back when I was a kid and the war was recent news, everyone knew that no one outfought the American G.I. This was gospel, and anyone who said different was liable to be beaten. All our soldiers were brave, and all our officers were competent. Today we know better.

Seventy years after the guns fell silent, just about every military historian rates the German army, not the American, as the best. This is a flawed process because an army is not a constant. Halfway through the war, most of the brave, able leaders from regimental on down through squad level were killed or invalided out, and the replacements did not measure up. This was true of all armies. Nor were all armies of uniform quality. Our airborne divisions were as fine as any soldiers, but we also had some divisions that collapsed entirely in their first engagement.

I believe it was Brigadier General S.L.A. Marshall who said that 100 German infantrymen were worth 125 American or British soldiers, or 150 Russians. (I’m relying on memory for this, and my memory is a flawed engine, so if anyone knows different, sound off like you got a pair.) They were better led, had better weapons, and generally got more out of those weapons than anyone else. Had the Wehrmacht not had a maniac in charge, heaven knows what it could have done.

The Germans benefited from a highly professional officer corps (a brand-new Leutnant had enough knowledge, at least in theory, to command a battalion) and a cadre of NCOs that had been in the service since World War I and had loads of combat experience. It’s been pointed out that the best of the Allied three- and four-star generals were as good as their German counterparts, but that the Germans had a great many colonels and major generals (no brigadier generals) who were far superior to their Allied counterparts, some of whom were pretty bad.

The British had a saying: “Until you’ve fought the Germans, you don’t know what war is like.”

One other service deserves mention: Max Hastings, one of the best of our World War II scholars and writers, says that the United States Navy in the Pacific, after it shook out its incompetent officers, became the single most proficient killing machine of the entire conflict in either theater. It virtually annihilated the Imperial Japanese Navy and the Japanese merchant fleet. Part of this was, of course, due to the fact that we out-produced the Japanese ship and aircraft builders by some insane margin, but still and all, the sailors did a very good job.

It’s all very interesting to discuss, but as I said, be glad you weren’t in it.