How Was Your Dove Opener?

My dove opener was outstanding, thank you very much for asking. Ten of us, mostly high school friends of my... 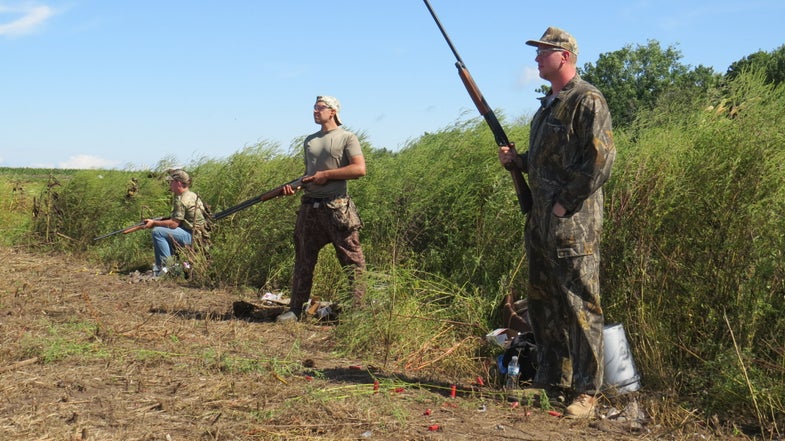 My dove opener was outstanding, thank you very much for asking.

Ten of us, mostly high school friends of my younger son and kids I had coached in trapshooting plus a few dads, hunted a sunflower field on a public area.

The first thing we did right was not go early in the morning. Dove hunting is new to us in Iowa, but people are getting into it. Many had gotten there early to claim good spots. Some had even been there since midnight and slept in their trucks. When we arrived at 8:30 the parking lot and the road shoulders were full of trucks, but out in the field people were picking up buckets and leaving en masse. It looked like a game had ended and fans were headed for the exits.

By the time we took our spot, strung out along a row of standing sunflowers, there were only a few groups left in the field. I was on the end, and the next group over, a party of three, turned out to be nice guys and good shots. We spotted doves and picked up birds for each other throughout the morning.

No one did anything unsafe, although I had issued John and his friend Mike shot-proof glasses just in case. Those two had never been dove hunting before, and they both burned up 100 shells apiece and had a tremendous time. Who knows how many rounds John would have gone through if he wasn’t shooting an O/U. As it was, it was a good reminder to me, who tends to be concerned with hitting what I shoot at, that for a lot of people, getting out and shooting your gun a lot on opening day is just plain fun.

I did not shoot a limit inside a box as I am sure many of you did. Shooting on a well-populated dove field is a lot harder than the hunting we do over decoys by ourselves in cornfields later on. Very few of the easy birds, the ones loafing along at low altitudes looking for a place to land, ever reached me alive. I had to make work with the panicked survivors and a few high overhead birds. I was about ten shells into box number two when I finished, and honestly, I would have shot more if I hadn’t been shooting a pump.

As I may have mentioned previously, my wife gave me a very nice 90s-era 12 gauge BPS for my birthday back in February, which I hope plan to use for doves and geese. The problem with it is, it’s a pump, and I haven’t shot pumps regularly except for turkey hunting in about ten years. Evidently shooting a pump is not like riding a bicycle (I always thought it was). You can forget how. I had even shot several rounds of skeet with it to refamiliarize myself with pumps, but in the excitement of actual dove hunting, I kept forgetting to work the slide. About half the time I only shot once at birds I might have ordinarily emptied the gun at.

My dove load continues to be an ounce of steel 7s and every bird I hit fell either stone dead or was completely incapacitated and nothing flew off or sailed into the trees or long grass where I couldn’t find it.

All ten of us shot limits, and someone killed a bonus pigeon, too. After we finished up and were hanging out in the parking lot, the CO checked us for birds, licenses and plugs. One boy in our group volunteered that his gun had no plug because it wouldn’t shoot more than three times anyway. The CO, who was very friendly, said “I’m tired of writing tickets. Go home and get a plug for your gun.”

In all, it could hardly have been a better public land experience and a great start to hunting season. I hope yours was, too.