Hunting Gear: Getting Ready for Africa

Having gotten ready for Africa numerous times, and having made most of the dumb mistakes you can make, I’m going... 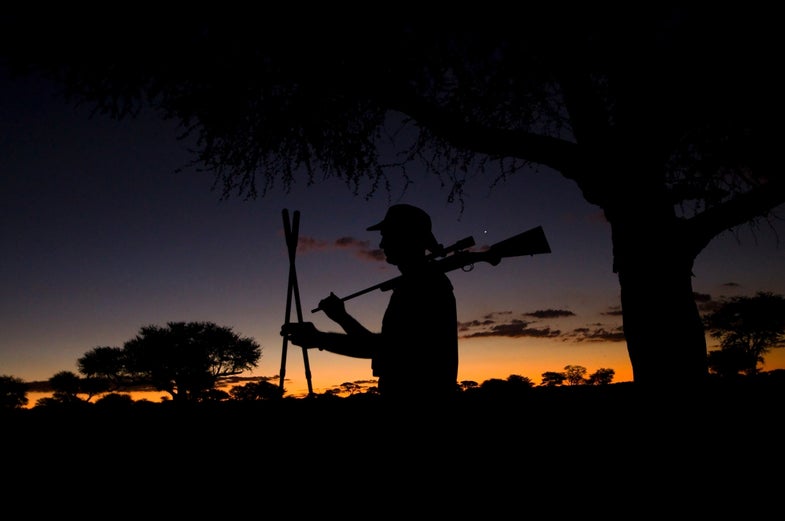 You need to bring very little on a hunt in Africa. Here are some of the essentials.. John Hafner
SHARE

Having gotten ready for Africa numerous times, and having made most of the dumb mistakes you can make, I’m going to answer Fordman’s question, even though he can’t spell my name which is at the top of the page. No one spells my name right. But that’s not important now.

One of the nice things about hunting in Africa is, you need to bring very little. In any well-run camp they do the laundry every day. So you take three pairs of long pants and three long-sleeved shirts. If you want to wear shorts and pretend you’re Craig Boddington, fine by me, but I’m not going to do it. Leave your camo at home. In many parts of Africa American camo shows up like a turd in a punch bowl. In some places it’s illegal to wear camo, and if you’re caught with it you’ll be thrown in prison and beaten twice a day until you die. The only color to bring is dark green. Not light green, not khaki, dark green.

Bring a down jacket that you can wad up in your daypack. It gets seriously cold in the morning. Bring gloves. I got a pair of Mechanix Wear M-Pact gloves (in coyote, not camo) which have armored backs and I wore them all day long. They get hot, and they’re not as sticky as I’d like, but in the land of 2-inch thorns, they save your hands a hell of a beating and they’re trendy. Also, after you’ve had half a dozen wannabe skin cancers frozen off the backs of your hands, gloves make sense.

I did not bring a fixed-blade hunting knife; I brought a Diamondblade folder which does not get in the way when you’re in and out of a truck all day long. The only things I cut with it were a chunk of cheddar cheese and some duct tape, which you should also bring. Duct tape, not cheddar cheese.

Send off to Murraycustomleather.com and order a Murray C-8 Rifle Cartridge Belt with 10 elastic loops for whatever size cartridge you intend to bring and in whatever length will encircle your massive guts. When you wear it, swing it around so the cartridges are right in front. Before you go, break it in by putting it on and running through thorns. If you don’t want to do this, hire a kid to do it. He’ll probably think it’s cool.

Every PH I’ve hunted with uses an ammo belt rather than an ammo pouch, and the older and more battered, the better. You can get at your cartridges faster than with a pouch, and a scarred up ammo belt makes you look like this ain’t your first rodeo.

Bring shooting glasses unless you have no fear of a 2-inch thorn in the eye. Wear clear or light grey lenses. Dark gray will throw animals into shadow where you will not see them.

Bring a boonie hat with a narrow brim. Don’t bring a baseball cap unless you’re going to play baseball, and don’t bring anything with a wide brim unless you intend to stop a dozen times a day to retrieve your hat from a thorn bush.

You can, if you wish, take malaria pills. I didn’t even see a mosquito much less get a bite much less get malaria, but I was hunting in the African winter, and in spring and summer it’s different. I’ve never gotten sick in Africa, and I’ve never know anyone who got sick except for one case of bronchitis, which is not African, and one gouty toe, ditto. I think the average hunting camp is a lot cleaner than the average fast food restaurant in the United States.

Bring sun block. The sun, even in winter, is like a blast furnace in Africa. Following the advice of the dermatologist who froze off my latest crop of wannabe skin cancers, I got Bullfrog SPF 50. I got up very early in the morning so it would have plenty of time to sink in, and slapped it on in great gouts. I had no trouble with the sun, but if you get this stuff in your eye, your shrieks will frighten away all the game within 12 miles.
Do not bring great, waffle-stomping boots with Vibram soles that are designed for climbing K-2. You want something that’s light and flexible, and in which YOU CAN WALK QUIETLY. Do not buy Russell boots. I owned a pair and ended up giving them to a Zulu tracker because they flopped around on my feet. I understand this is common. Having them flop around on your feet, that is, not giving them to a Zulu tracker. You can give them to a Shona tracker, or an Ndbele tracker if it pleases you.

You’ll need a small backpack for the plane, and to carry in the truck with you. When in the truck what I kept in mine was my camera, spare ammo, a first aid kit, a flashlight, and a copy of the Book of Common Prayer. You never know.

Next: Guns and ammo. Pardon the expression.