Several years ago I used to hunt with a young and very driven law student who was also a serious... 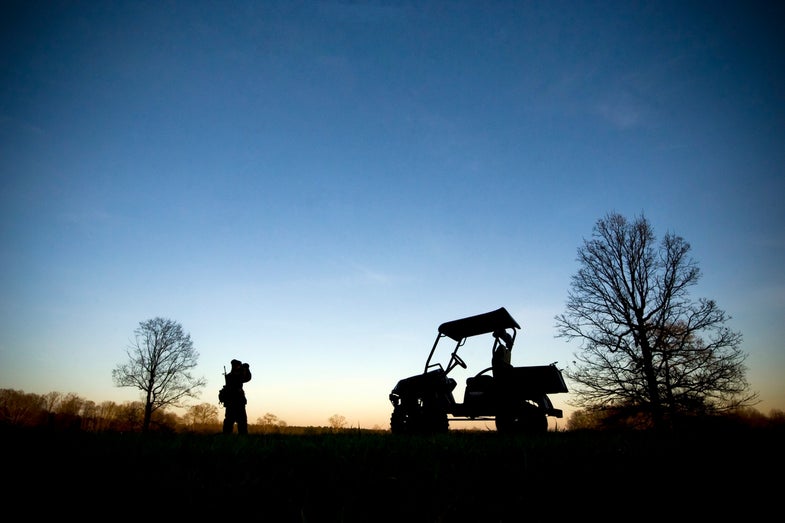 Several years ago I used to hunt with a young and very driven law student who was also a serious bicycle racer. We chased pheasants pretty hard, and at the end of one long day he said to me: “Most deer hunters couldn’t do what we just did. They’re not in shape for it. They just sit in a tree.”

I took some exception to that remark, because I dragged my own deer by myself by hand in those days, but that was then, and now, I am beginning to wonder if he wasn’t right, at least about hunting in 2015.
Last week, for instance, I recently reported in Field Notes on a 14-year-old girl in Texas who shot an all-black whitetail buck. First let me be clear: I am genuinely happy for her. It’s great she killed the trophy of a lifetime and is excited about hunting.

That said, her hunt went like this:
Ride an ATV to a blind on a 58-degree afternoon
Sit in the blind eating potato chips
Wait for the feeder to go off
Spot the black deer.
Wait while her father called another hunter on the lease to discuss whether it’s okay to shoot a six-point black deer on a place with an eight-point minimum.
Shoot the deer.
Haul the deer out with the ATV.

That’s it. That’s what hunting has become to a lot of people.

And, while I still spend most of my hunting days walking after bird dogs or turkeys, or packing duck decoys on my back, I’m also guilty of hunting like the scooter-bound human blobs in Disney’s “Wall-E” from time to time. I drive goose decoys into a field, dump them out, set them up, then lie in a blind playing with my phone until the geese arrive.

There was a time or two this year when I walked decoys in the old fashioned way due to muddy fields, but mostly, I drive to the X and I like it that way. At least the best goose hunting usually takes place in the bitter cold, so there is some suffering involved, if not much exertion. Still, I realize I am throwing stones from the lawn of my glass house.

Growing up, I always thought hunting, even the comparatively tame Midwestern hunting I know, required a certain amount of physical fitness or at least the toughness to endure the elements. That seems to be less and less a part of the hunting experience for more and more of us, and I wonder if we aren’t losing something important.