Shortly after the SHOT Show, I wrote about the FirstEdge 5050, a fixed-blade survival knife that had been designed in... 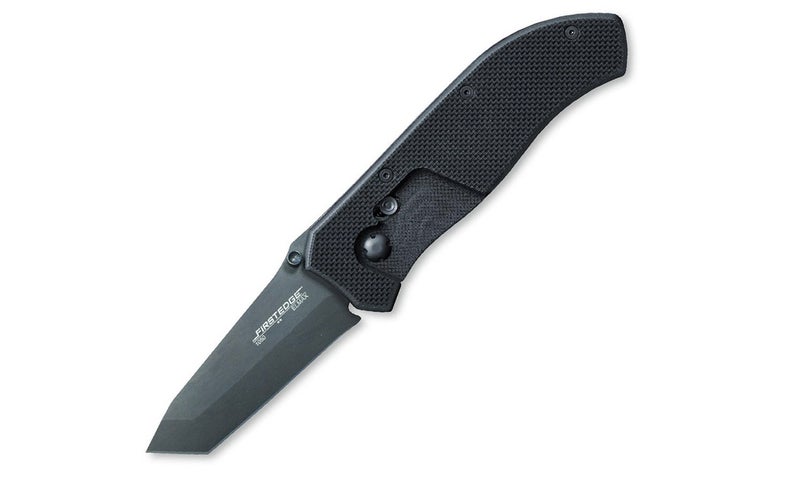 Shortly after the SHOT Show, I wrote about the FirstEdge 5050, a fixed-blade survival knife that had been designed in conjunction with Special Forces. The Fighting Soldiers from the Sky wanted something that would be impossible to break, no matter what was done to it. FirstEdge gave them what they wanted.

The 5050 is not a big knife in terms of overall size, but it’s massively built. What is rare for a knife of this nature, it is also exceedingly sharp. When I got my hands on one I gave it a couple of swipes down a Crock Stick and it went into a realm normally inhabited by scalpels. It’s one of the half-dozen sharpest knives I’ve handled in 60 years of fooling with the things, and is either the strongest razor-sharp knife I know of, or the sharpest unbreakable knife I know of.

It is, however, much too large and heavy for everyday use. This is why FirstEdge has come out with the TrackLock series of folders. There are three models ($275–$325) and they differ only in blade shape and method of opening. The big, rough-textured handles are made of G10; the blades are Elmax, a very high-grade Swedish cutlery steel that is highly rust resistant; the liners are stainless steel, and all the blades are available with either plain or partial serrated edges. The blades are either 3 inches or 3.2 inches long, and weight is a shade under 6 ounces, which is quite light. There’s a tanto, an improved tanto, and a drop point, and the knives are available in manual, assisted-opening, and automatic versions. For all the specs, go here.

They’re also very strong, but a folding knife can never be a fixed-blade knife. The blades must be lighter and thinner, and there’s always a joint of some kind. Some are pitifully weak. I owned an expensive OTF (out the front) automatic whose blade was loosened by prying four staples out of a target frame.

I doubt this will happen with TrackLock. The mechanism employs a heavy steel pin, which rides transversely in the blade and, when the knife is completely opened, locks into the stainless-steel liners. The principle is the same as the Greener crossbolt (aka, the Kersten lock). Everything is steel on steel. You pull the pin out of battery with a small, attractive button in the handle. The whole thing works very smoothly; I can open my manual model by starting the blade with my thumb and doing the rest with a flick (not an effeminate one, though) of the wrist.

This brings us to BudgetBugout, which is the nom de blog of a young man who tests survival gear. It seems he tested a tanto-point TrackLock by stabbing a plank with it repeatedly and twisting. He broke the first half-inch or so of the point off by doing so, and took the knife to task for it.

Most of his bloggers agreed that for the TrackLock to fail, considering the price that’s charged for it, is a crime against God and man. Maybe.

There are tantos and tantos, and a great deal of difference in how they’re ground. The purpose of the original tanto point, which was used on the Japanese knife of that name and some katanas and wakazashis, was to get a second point on the blade for slashing so that if you wanted to dump someone’s guts on the ground, or dump your own guts on the ground, for reasons of honor, it gave you a fearsome slashing stroke.

In the 1980s, Lynn Thompson, who heads up Cold Steel, re-engineered the tanto point by grinding it so that the whole thickness of the blade came almost to the very tip of the knife. This gave a chisel-like point, which was terrifically strong, and Mr. Thompson used to stab car bodies with his tanto with no damage to the blade, and sold a ton of knives thereby.

However, if you look at the TrackLock tanto, you can see that it’s been designed for precision cutting, not for twisting in wood or anything else. Use your eyes and your common sense. FirstEdge has, in fact, designed a modified tanto blade (they still offer the original) in case you feel the overwhelming urge to stab inanimate objects and twist. They also advise me that the drop point, is much stronger than the traditional tanto point, in case you get the urge to stick that in something and twist.

You can make anything fail if you use it poorly enough. If you take BudgetBugout’s method to its logical conclusion, I should run over my test rifles with my SUV. After all, rifles are rolled on by horses, fall down cliffs, and driven over by pickup trucks, so why not?

One of the jobs of the outdoorsperson is to know your equipment—what it can do, and what it can’t. This is one of the ways you keep yourself out of trouble. And I can tell you that no folding knife, no matter what the blade shape or hinge design, is intended to be twisted. I believe that Lynn Thompson can do a chinup using his folder for a handle, and Lynn weighs a lot, but he doesn’t twist it.

Penultimately, I would like to quote from the guarantee that FirstEdge adopted on May 15th: “…Our folding knives are tough and are designed for powerful, precision cutting. If your folding knife fails to perform due to a defect and doesn’t meet your expectations, we will repair or replace your knife free of charge—forever. We don’t expect our knives to fail, but if this happens, we will take care of you.”

And finally, because I’m a positive and upbeat person, some advice for BudgetBugout:

What’s your name? If you’re going to mouth off to the camera, put your name behind it.
What makes you an expert?

Work on your diction.

Don’t wave stuff right up in the camera lens.

If you want to stress-test a rifle by shooting it when the barrel is plugged, wear safety glasses.

I hope this is useful.