Some years ago, Work Sharp electrified the world of knifery by coming out with The Original Knife and Tool Sharpener,... 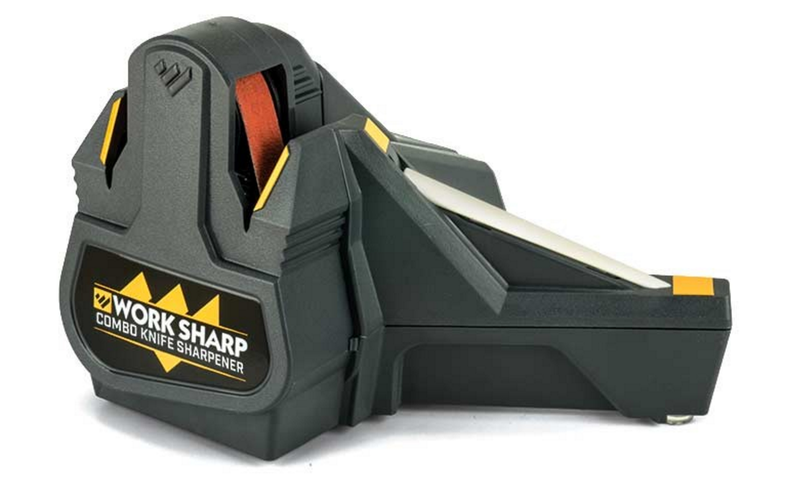 The Work Sharp Combo Knife Sharpener is compact and easy to use.. Work Sharp
SHARE

Some years ago, Work Sharp electrified the world of knifery by coming out with The Original Knife and Tool Sharpener, which is damned near foolproof, even when used by the ham-handed, fumble-fingered, and half-bright. The Work Sharp machine will not tear steel off the edge, or allow you to grind at the wrong angle, or scratch up the blade, or overheat it. It will also allow you to sharpen nearly anything from knives through guillotines.

However, some people want to sharpen only knives, and not have to pay for all the extras, so there is now a new model called the Combo Knife Sharpener that does just that and only that, can’t be adjusted or reconfigured, is very compact, and costs only $59.95. There are two belts included, but they’re both of the same grit, so you can’t even go wrong there.

The reason for the Combo in the name is, there’s a fine ceramic rod embedded in one of the legs, so if you want to do some final touching up by hand, or skip the belt sharpening altogether, you can do it. Or you can ignore the rod completely. It won’t mind; it’s just a piece of ceramic.

Along with the Combo, I got a new knife from CKRT (Columbia River Knife and Tool) called the Homefront. Homefront is a Ken Onion design, and Mr. Onion knows his stuff. I’ve used several of his knives, fixed-blade and folding, and can vouch for that.

The 3.5-inch blade is AUS 8 stain-resisting steel with a very nice drop point and a fuller. It’s a liner-lock design and you can get it open one-handed by pulling back on the opener stud and flipping your wrist to put the blade into battery. The handles are aircraft-grade 6061 aluminum and are anodized olive drab.

What sets the Homefront apart is, it’s designed to be completely disassembled. Push a lever, turn a wheel, and the handle scale comes off exposing its inner workings so you can clean the sand, mud, or general ugh out of there.

The Homefront is extremely strong, ideally suited by blade shape and size for hunting, quite light for its strength, and costs $150. I don’t see how CRKT can make a knife of this quality for this price, but they do. Maybe that’s why I write the blog and they make the knives. (Homefront link here).