The scope I settled on for this project was the Bushnell Elite Long Range Hunter. It’s not a tactical scope,... 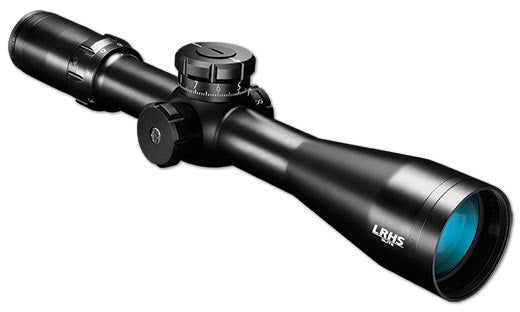 The scope I settled on for this project was the Bushnell Elite Long Range Hunter. It’s not a tactical scope, but it borrows features from tactical scopes that make sense. The LRHS 4.5X-18X, which is what I got, has a 30mm tube, but is not unduly long, heavy, bulky, or hard to mount. The reticle is worthy of special mention. It gives you enough useful information without overwhelming you. There are tactical reticles that Johannes Keppler, Tycho Brahe, John Unertl, Carlos Hathcock, and Chris Kyle, combined, could not figure out. When you’re shooting under pressure, all those symbols and lines and numbers are going to go right out your head. You want something simple, but sufficient. Here it is.

The adjustments are solid. The windage knob is pretty good, and the elevation knob is very, very good. It also has a return to zero feature so that when you’ve been cranking in comeups nonstop and have no idea of where the hell you are anymore, you crank the knob known until it stops and you’re back at zero.

Real world price is around $1,300, but in a field of endeavor where you can easily pay twice that for a scope, that price ain’t bad.

Bullets. You want something streamlined with a pointy tip, a boattail, and a BC of around 450 or higher if you can find it. Do not use target bullets. If it doesn’t say “hunting” on the box don’t buy it.

Sighting In. The instructions you get with just about every scope I’ve seen blithely assume that you know all about sighting in for long range. This is because they’re written by engineers, who, to quote from Bill Heavey, are home-schooled by chimpanzees. Here’s the system I’ve evolved.

Assuming you’re shooting a bullet with a nice BC and a muzzle velocity of around 2,500 to 2,700 fps, sight in so that you’re dead on at 200 yards. You probably won’t be shooting any closer, and it’s a nice place to start. Farther than 200, you either add clicks or use the stadia wires; you do not touch that 200-yard zero.

But now your troubles begin because your next step is back to 500 yards. (I’m assuming you’re shooting on a standard range layout where there is no 400-yard line. If you have a choice, by all means shoot at 400.) Here, with the ballistics I listed, I have to crank in 36 clicks of elevation, because the bullets start dropping like stones.

Except: With the Savage, I couldn’t hit the target at 500, and had no idea where the hell the bullets were going, except I could see the dust splashes coming from somewhere on the backstop. Finally, my spotter watched the vapor trails.

“You’re shooting 16 inches to the right and 6 inches high.”

And by God, I was, and I have no idea why. There was no wind, and the mirage was running right to left.
Coriolis effect?
Chandler’s wobble?
Beelzebub?

The morals here are: Rifles do that they want, not what you expect. It’s your job to find out what they want, and not rely on something you got off the Internet. And, either bring along a good spotter, or bring lunch and a lot of ammunition, because you’re going to be at the range a while.

So I cranked in 16 inches worth of left windage, and used the 10 MoA stadia wire, and everything worked.

Now, why am I going through long range at such length? Because my column in the magazine is limited to 750 words, and you can’t begin to cover the subject in that length, and because most of the directions I read are pretty damned insufficient.

In the next installment, I reach the 600-yard line, and conclude with a discussion of whether shooting at these distances constitutes hunting or not.