As I mentioned in an earlier post, I broke my turkey drought the other day with this bird, a fat... 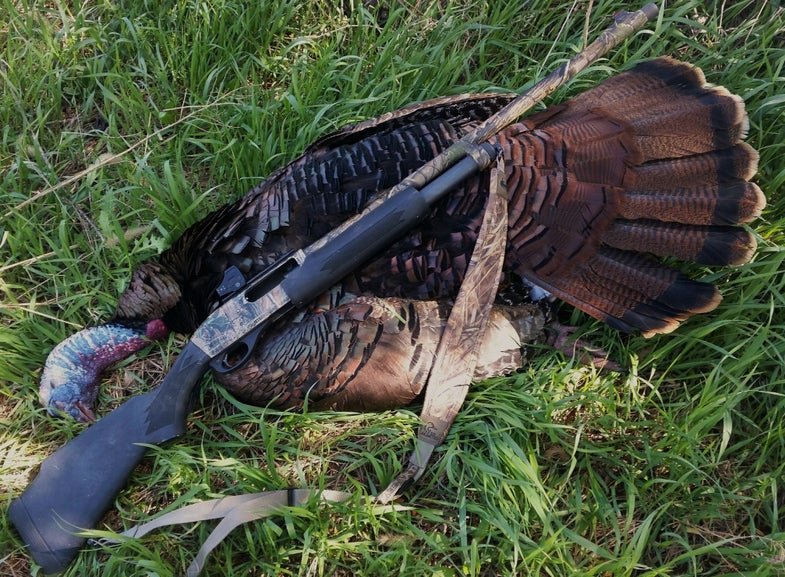 As I mentioned in an earlier post, I broke my turkey drought the other day with this bird, a fat 3-year-old pushing 24 pounds. I shot it on a classic run-and-gun timber hunt that was well worth the two-year wait. In my excitement to post about it, I neglected to write about turkey guns and ammo, which is supposed to be my job. So here’s my bird and my gun.

While I generally agree with the belief that you shouldn’t kill beautiful birds with ugly guns, I take a perverse pride in the ugliness of my turkey gun. (It’s debatable whether turkeys are truly beautiful. I think they are, but only in a Jurassic sort of way). At any rate, my gun is an 870 Super Mag. It was already worn, ugly, and I had put a stock with a mis-matched camo pattern on it. This year I decided I wanted a Monte Carlo stock, but I could only find one in black, hence the current color scheme.

It may be ugly, but it is a finely tuned turkey gun. It has the following extras: a Rob Roberts Gunworks .665 choke that Rob tested and matched to my gun that shoots everything I have tried through it terrifically. Roberts relieved the forcing cone, too, and while I am not completely convinced that helps with patterns and recoil with all guns, I had it done anyway. I installed a Timney Trigger Fix kit, so the gun has a very nice 3-pound, 6-ounce trigger. It also has an Avery neoprene sling. The give of neoprene makes carrying a slung shotgun for miles much more pleasant.

The sight on my gun this season (I have had scopes, other dot sighs and I have used its iron sights) is a Meopta Meosight. It’s light, has a rugged housing and a little drawer that holds the battery so you can switch batteries without taking the sight apart as you have to with other sights of this kind. The 5-MOA dot is very easy to adjust, and you can set it on one of eight brightness levels or set it to auto adjust.

Finally, I shot 3-inch Winchester Long Beard 5s, which produce a frighteningly dense pattern in this gun. In fact, I was thinking it was overkill when I patterned it, but when I had this bird standing in profile at 35 yards, head tucked into full strut, I was confident that the pattern would be tight enough at that range to kill him. It was. My shot put at least a dozen holes in the head and first inch or two of the neck.