This year’s SHOT Show saw two big shotgun introductions and enough other new guns that it turned out to be... 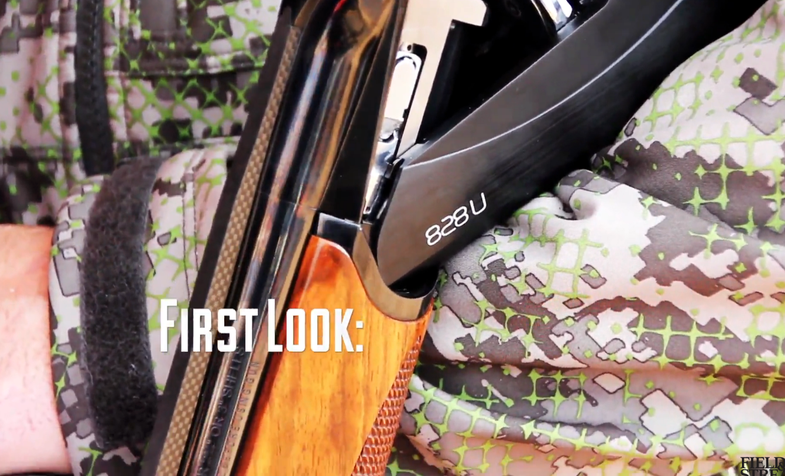 This year’s SHOT Show saw two big shotgun introductions and enough other new guns that it turned out to be a decent shotgun year. There was very little in the way of exciting new ammo, but we’ve got some interesting new guns to run our old favorite shells through.

Benelli’s first over-under looks like no over O/U ever, but it sure looks like a Benelli. The steel locking-plate action is contained inside a lightweight alloy receiver, which, combined with a carbon fiber rib and missing side ribs, keeps the gun’s weight down to around 6 pounds, 10 ounces in 12 gauge. The shape of the receiver allows the 828U to be the first break action that can be user-adjustable for fit with stock shims. The gun also has Benelli’s Progressive Comfort recoil reduction system, which does help make recoil a little more manageable. The trigger group drops out, a feature usually found only in high end target guns. It will come in 12 gauge initially, with a choice of 26- or 28-inch barrels for $2499 in black and $2999 in engraved silver. I had a chance to hunt with it last fall and found it light to carry and easy to point. Some will love it, others will hate it, but it’s a completely new take on O/U design that broadens our idea of what a break-action gun can be.

Remington’s V3 looks to be the successor to the great but, frankly, outdated 11-87. It’s a whole new 3-inch gun based around the Versaport system pioneered in the 3 ½-inch Versa Max. The V3 has eight gas ports in its chamber and the length of the shell determines how much gas reaches the pistons contained in a gas block below. Despite its similarity to the Versamax in operation, this is a whole new gun, and shares no common parts with the 3 ½-inch Versamax. In place of one action spring in the buttstock it has a pair of smaller ones inside the receiver where they are easier to reach for cleaning and inspection. It’s lighter than other Remington semiautos at about 7 ¼ pounds and has a unique magazine cutoff in front of the trigger guard. I hunted with a V3 around home last year and shot ducks, geese, and pheasants with it and liked it a lot. The best part is, it will list for around $800.

Syren, a Caesar Guerini/Fabarm brand, debuted at SHOT last year with four guns stocked for women. This year they have a dozen models, including the camo-clad XLR5 Waterfowler. With a monte carlo stock to accommodate women’s longer necks, a shorter length of pull, a toed out stock and a tighter grip radius to suit smaller hands, the Syren stock comes a lot closer to fitting women off the rack than does the average production gun. The Fabarm XLR5 is a very soft-recoiling gas gun that I’ve had a chance to shoot in other configurations and have been very impressed with. $1999

Beretta has been in existence since 1526, and, unless they made some left-handed arquebuses back in the 16th century that I am not aware of, this new A400 is the first left-handed smoothbore in Beretta history. It’s simply a mirror image version of the 3-inch Action with the ejection port on the left side and a reversed safety button. In all other ways it’s the same excellent semiauto Beretta makes for right handed shooters. The A400 is reliable, easy to clean and an all-around good shooter. I kind of like the bronzed receiver, although the “enhanced” wood (fake grain) is pretty ugly. Around $1500.

One of the ongoing themes of these past SHOT Shows is the steady improvement in Turkish guns made for the US market. I was running, and running late, to a meeting when I glanced into the Weatherby booth and spotted the Orion. I had to stop in for a look. At first I thought somehow they had resurrected the fine old SKBs that used to bear the Orion name, but this is an all-new Turkish model. It has a low profile action similar to that of the Beretta 680 series and the fit and finish looks very good. The Prince of Wales grip and gloss finish identify it as Weatherby shotgun, too. I haven’t shot this gun yet but am looking forward to trying it this spring. So far it comes in 12 gauge only. Its only cosmetic flaw is a far forend that makes the gun look as if it’s in the early stages of pregnancy, but for $1099 I can overlook that.

Another Turkish gun that caught my attention was the Stevens 555, which I had a chance to shoot some last fall. Having tried the old Stevens 512 and been underwhelmed, I was pleasantly surprised by its successor, which is much trimmer and lighter than its predecessor. I shot the 12 gauge which only weighs about 6 pounds thanks to an alloy receiver. There’s a 20, 28 and .410 in the line as well, all built on proportionally scaled frames. All four gauges have extractors. The gun has blacked metal, matte finished walnut, and it lists for just $692.

I have always been fond of the 835 as a turkey gun. I got mine a decade ago just as my turkey hunting fortunes took a turn for the better. For the next five springs and five falls I cut a medium-wide swath through our local turkeys with it, until I had to sell the gun to pay for emergency surgery for my shorthair, Jed. The 835 was light, slick and reliable even on those occasions I had to shoot more than once. The only features I don’t miss about it were the horrible, flimsy fiber optic sights that couldn’t be trusted to stay put. This new 835 turkey gun replaces those sights with a sturdy steel rib-mounted peep sight from Marble Arms. The set consists of a double-ring rear sight and a fiber-optic tipped blade on the front. Like any other peep sight, it is fast and highly intuitive to use. I bet that ring snags all the time when you pull the gun out of a case but I’m equally sure it won’t break in the woods. About $650.

Browning’s Cynergy isn’t new, but its price tag is, and that’s good news. The Cynergy has been around for about 10 years. Rumor has it the gun was once intended as the replacement to the Citori but the buying public was having none of that, so both guns remained in the lineup. The Cynergy’s advantage over the Citori was a much lower-profile receiver. It also had an extremely strong, durable action and mechanical triggers with excellent pulls. All that said, the Cynergy found favor with some target shooters but never took off. For 2015 Browning has repositioned the Cynergy in its line, lowering the price of field guns below the entry level Citori price, and chopping several hundred dollars off the price of the Sporting Clays model. The version I’m holding in the video (click the photo) is the field gun selling for $1869. As I say, the real bargain is the sporting model, which lists for $2,399, down from $3200 or so.

The Browning Citori 725 improved on the original by trimming height and weight from the receiver and adding mechanical triggers (further complicating Cynergy sales, which helps explain number 8 on this list.) For this year, the 725 now comes in 28 and .410 field and sporting models. The new smallbores are built on the already trim 20 gauge receiver instead of on scaled frames so they actually have a little more heft than the 20s. That’s all to the good if you want one of these guns for targets or, better yet, for doves. $2539 field, $3199, sporting.

One of the best good news stories in the shooting sports is the exploding growth of youth clay target shooting, of which trap is the most popular discipline. There’s now a need for solid, affordable beginner’s trap gun and Winchester’s SXP trap fits the bill. The SXP is an improved, Turkish-made version of the old Model 1300 pump which was always a cheap but dependable gun. This one comes with a soft Inflex recoil pad, a Monte Carlo stock (very important, as it allows shooters to “float” the bird and keep it in sight throughout the shot), a raised rib with front and middle bead and Modified, Improved Modified and Full chokes. It comes in a fullsize 30-inch barreled model and a short-stocked “Compact” version with a 13-inch length of pull and either 28 or 30-inch barrels and the best part is, you get all that for $479.99