The following has nothing to do with optics, which we will get to in a moment. Harare, the capital of... 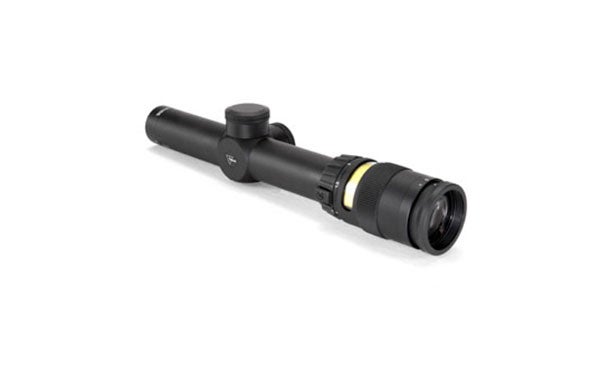 The author chose the Trijicon TR24-3 AccuPoint 1X-4X to top his .416 during a cape buffalo hunt in Africa.. Trijicon
SHARE

The following has nothing to do with optics, which we will get to in a moment.

Harare, the capital of Zimbabwe, is home to numerous traffic circles called roundabouts, where the traffic flows more or less continually unless someone decides to stop because they recognize a friend in another car and feel the need for conversation. (Driving in Zim tends toward the whimsical and, combined with the fact that people drive on the left-hand side of the road, I was often left chittering in terror.)

The islands in the roundabouts are often home to newspaper vendors. Zimbabwe has a thriving newspaper industry, and their publications, and The Daily News in particular, make our papers look timid by comparison. On May 20th, Zimbabwe Newsday ran as its front page headline “Public Masturbator Arrested.” A young man in the city of Bulawayo committed what the paper called “unholy antics” and was arrested and charged with indecency.

I was encouraged to see that public self-abuse is not OK in Zimbabwe, and that the editors thought it was the most important thing that had happened that day, and even more heartened to see that nowhere were Donald Trump or Hillary Clinton mentioned. I was going to buy a copy of the paper as a souvenir, but didn’t know how I’d explain it to U.S. Customs if they found it in my duffle bag.

Optics. This trip re-confirmed some of the basic truths I’ve been yammering about for all these years. I took, as my binocular, a Zeiss 8×30 that I bought in an Orvis store in 1985. It’s still the ideal size, weight, and magnification for peering at buffalo and such, and the only servicing it’s ever had was when I brushed the dust off the lenses. In the meanwhile it’s been to Africa at least a half a dozen times and served on more whitetail hunts than I can recall. It’s probably eight or nine generations obsolete, but it still works fine and I have no intention of replacing it. I think I paid $500 for it. I’d call that money well spent.

I was mildly shocked to see that Buzz Charlton’s trackers, Nyati and Criton, carried Swarovski binoculars. I had not seen trackers with binoculars before, much less these, but Buzz explained that he bought them for the guys because no matter how good their eyes are (and they are fantastic) they see more with binoculars of the first magnitude.

Buzz also uses Swarovskis, and tucks them between his pants and his cartridge belt. He says it’s a very convenient way to carry them, and also lets him keep tabs on how fat he’s getting. I long ago lost count of the guides and outfitters I’ve hunted with who owned the clothes on their backs, a pickup truck, and a $2,000-plus binocular. When your livelihood depends on seeing game, this is where you break the bank.

At the last moment, I installed a Trijicon TR24-3 Accu-Point 1X-4X scope on my .416. I had it on a whitetail rifle, but it seemed to be ideal for Cape buffalo because it goes down to a true 1X, has a German #4 crosshair, and a green illuminated aiming point that draws power from ambient light and not from batteries. I have a very high regard for Trijicon and don’t think I’ve written enough about them.

The scope went through 50 rounds of practice shooting and 11 rounds in actual combat. It also endured 16,000 miles of air travel on a jet (plus undoubted ramp-ape abuse) and another 500 miles in a small plane and 10 days of bouncing around in a truck gun rack, plus one occasion where I cracked the muzzle against a tree hard enough to damage the front-sight hood.

The net result was that it never budged. I sighted it in when we got to camp in Africa and it was right on, and it was still on when I got back to the U.S. and checked it at the range. You can’t do any better than this.

I also found that in the heat of battle you don’t see the 4A reticle; your eye goes right to that little green light. It’s the fastest way to aim that I know of, and Buzz loved the scope, which says a great deal.