Snappy title, huh? Well, what the hell, it gets to the point. Hunting season is upon us, and being ever... 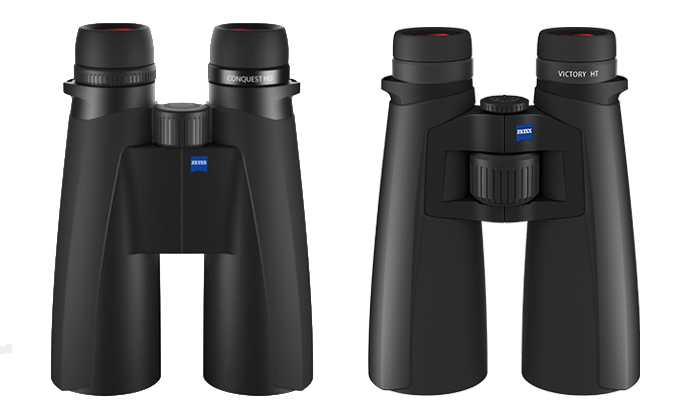 Snappy title, huh? Well, what the hell, it gets to the point. Hunting season is upon us, and being ever mindful of ways in which you can spend your money, I thought I’d let you know about these new glasses. Both are standouts, and one is quite different from the other.

As I’ve pointed out, in some kinds of hunting—caribou, elk, sheep, for example, where you study big tracts of real estate—there are few things handier than a 15X binocular. Add to that any kind of hunting where you will be looking a lot in dim light, such as beanfield hunting. To put things in a nutshell, a 10X glass will let you see that a deer has antlers; a 15X will let you count the points, and the length of the points, and study the branches.

The Zeiss Conquest HD is notable for what it is not as a 15X binocular of the first magnitude. It is not bulky, or heavy, or horrifically expensive. At 45 ounces, it’s light enough to wear around your neck, or if you have a neck like that of Ms. Natalie Portman, you can keep it in your daypack. I used this glass from 60 yards by the dawn’s early light to 600 yards at the twilight’s last gleaming, and the thing is simply amazing. It’s completely waterproof, has excellent hardware, and even comes with a tripod adapter, which you may or may not need.

The MSRP is $1,777, which is not cheap, but which is also a lot less than comparable Teutonic glasses of this power and quality. It’s a specialized piece of equipment but, as I said, until you’ve used one, you can’t believe what a difference all of those extra Xs make.

The Zeiss Victory (HT) 10X-54mm glass is, on the other hand, expensive. It’s an all-out assault on dimness and darkness, and may cause you to yelp “Gott in Himmel!” when you first look through it. Zeiss has taken the very clever step of using 54mm Schott HT (High Transmission) lenses for the objectives; the usual diameter for a night-glass objective is 56mm, but this seemingly small reduction in lens size produces a 20 percent reduction in weight.

Light transmission is a whopping 95 percent, and is achieved not only by the big lenses, but by Zeiss T* coating and Abbe-König prism system. This glass is very strong, exceedingly well designed (the focus wheel is huge, and you can’t possibly mistake it for the diopter focus, for one example), and has every refinement that you can pack into a top-of-the-line glass. If you don’t understand all the optical terms, or care, let me put it this way: The first time you look through this binocular, you may literally jump at the sharpness and brightness of the image.

The list price is $2,777.77. You can of course get one for hundreds less, but it’s still a lot of money. But be advised: I’ve been telling people to go ahead and break the bank on glasses of the first rank for more than three decades now, and I have never heard from one person who did so and later regretted it.

Think about that. This binocular is something else.