“Rebel Yell: The Violence, Passion, and Redemption of Stonewall Jackson,” by S.C. Gwynne

If Mr. Gwynne’s byline seems familiar, it’s because he’s also the author of Empire of the Summer Moon, a history... 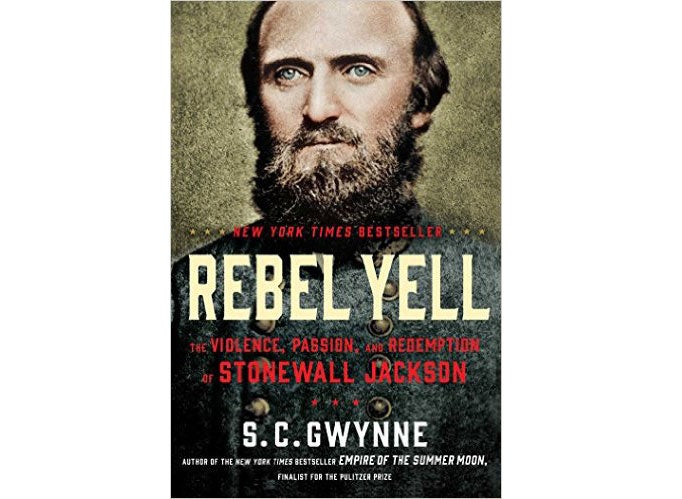 Rebel Yell was Published in 2014 and is available at major bookstores and Amazon.com. Amazon.com
SHARE

If Mr. Gwynne’s byline seems familiar, it’s because he’s also the author of Empire of the Summer Moon, a history of the Comanche Empire, which I had the pleasure of reviewing here a while back.

Now he’s taken on a Confederate general who was an authentic military genius but is now overshadowed by Robert E. Lee. As a historian, Mr. Gwynne shares two traits with Alan Guelzo, whose recent book on Gettysburg, The Last Invasion, is also something of a masterpiece. First, he is a hell of a writer. There’s no other way to put it. Second, he forces you to re-examine what you think you know and, more often than not, throw it on the scrap heap.

My picture of Jackson was that of a cold, austere, eccentric fanatic who was the inspiration for quotes such as:

“All old Jackson ever give us was a musket, 60 rounds, and a gum blanket, and he druv us like hell.”

“Jackson would hang a man at the drop of a hat, and he’d drop the hat himself.”

And Jackson’s own remark to an aide after the Battle of Fredericksburg, when the officer asked how the South could keep other cities from devastation by the North:

Jackson was eccentric; he was religious to the point of fanaticism; he was a rigid disciplinarian who hanged and shot soldiers who did not do their duty. But he was also personally kind, completely fearless and, most important, one of the few generals on either side who saw from the very outset what the war was going to be like and what it would take to win it. He was absolutely ruthless, secretive, and unsparing of his men and himself.

But he led his troops to victory after victory, always against overwhelming odds, always after prodigies of effort on their part, and in the end they loved him for it. Jackson was cheered on many occasions by his own troops and even by Union prisoners of war. Soldiers plucked hairs from his horse’s tail as souvenirs. When he died after being accidentally shot by his own troops after Chancellorsville, it occasioned an outpouring of grief matched only when Abraham Lincoln died two years later.

I said that Mr. Gwynne writes like hell. Let me give you a couple of samples:
“War made a mockery of the idea of a benevolent God. It replaced the family home with the rank, powder-scorched horrors of the battlefield. These were the new truths. In war you lived outdoors like a wild animal. You lived in blistering heat, in drenching rains, and knifelike cold. You were exposed and vulnerable. The majority of men who died did not even have the honor of dying in a fight. Two out of three were carried away by diseases that killed them just as surely as minie balls. Those who survived did so on a quarter-pound of bacon and eighteen ounces of flour a day…Men lived without shoes or coats or blankets…

“Jackson by this point in his meteoric and still ascendant career cast a large shadow, far larger than the sum of his flesh and blood parts. There was something fateful about him, something foreordained, as though he had been born to occupy precisely this moment in time and space, as though his strange and mystical communion with God had granted him special power over his own men and his enemies…Though James Longstreet was a good general and a resolute fighter, he was a prosaic and somewhat colorless human being. Jackson, by contrast—remote, silent, eccentric, and reserved, his hand raised in prayer in the heat of battle—suggested darkness and mystery and magic. Longstreet inspired respect; Jackson, fear and awe…”

Friends, I write a little, and I can tell you, you don’t do better than this.

Alan Guelzo said in his book that the horrendous numbers of deaths of the Civil War (750,000 is the new and commonly accepted number; in terms of today’s U.S. population, that would be 6 million men) was caused not by the new and deadly weapons available, or by the generals’ failure to understand how they should be used, but by the sheer clumsiness of those generals in fighting battles. Untrained and poorly trained troops. Outmoded tactics. Lost orders. Unclear orders. Units delayed. Units lost. Incompetent generals. Muddy roads. Military egos. Talk about trying to manage chaos. Mostly, they could not. Mr. Gwynne is particularly good at dissecting the confusion of those struggles and showing what went wrong (and sometimes right) and why.

And in the end, he leaves us with one melancholy fact. During the Civil War, 6,000 men served in the Stonewall Brigade, the unit that brought Jackson to fame. When the killing finally ended, only 210 were still capable of carrying a musket.

This is a great, great book.