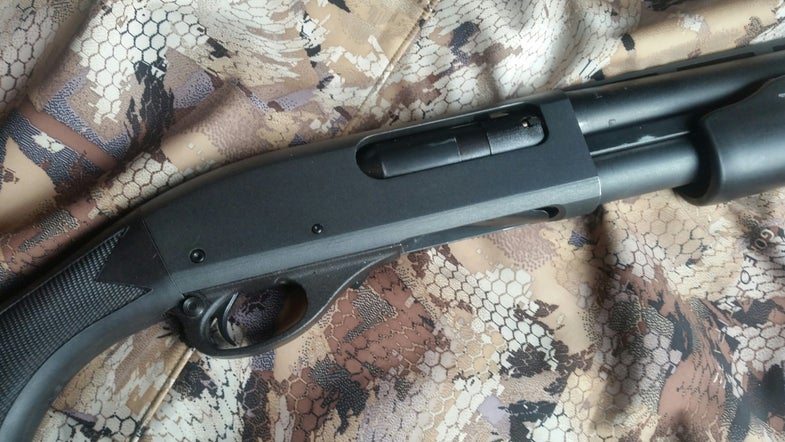 So I took a chance and picked up a used 2004-vintage 870 Express Super Magnum a month ago at my local store. Although I have seen plenty of 870 Expresses that are as durable and reliable as any 870 ever, enough of the newer ones have problems that it’s a bit of crapshoot when you buy one, new or used.

The next day I tried shooting it. Fired shells stuck in the chamber and I had to knock them out with a rod. Honestly, I was disappointed but not surprised. I have seen the same problem with a lot with 870s made in the last 15 years, and with some other inexpensive shotguns, too. Cheap steel-headed ammo and poorly finished chambers make a bad combination. On top of that, the shell in the magazine wouldn’t release when I worked the action.

Fortunately the store stands behind guns they sell and they sent the Super Mag off to a warranty center, where it got a new cartridge stop to replace a mis-stamped original part. That cured the magazine hangups. The gunsmiths at the warranty center deburred the rim of the chamber and recut part of it as well to solve the sticking. The Super Mag came back at no cost to me, and now it’s perfect with any ammo I feed it. The action is smooth and slick. The gun points well, I can shoot it straight and it’s going to join my starting lineup as the cold weather goose gun this winter.

Most Expresses can be cured of shells sticking with a good chamber polishing, but really, guns shouldn’t leave the factory in that condition. Nobody makes them like they used to. The question is, who’s to blame? It’s easy to point a finger at gunmakers for cutting corners and making cheap guns, but how much of the fault is our own, for demanding shotguns that sell for $350 or under?

Most people own TVs that cost more than $350, and they’ll replace them in a few years. A shotgun will outlast you, your children and maybe your grandchildren. It seems to me a product with that kind of longevity is worth paying a little more for.