Rules of Engagement, the Indian Wars, and the Movies

“Dances with Wolves” is one of my favorite films, and won an Oscar for Best Picture of 1990. You can... 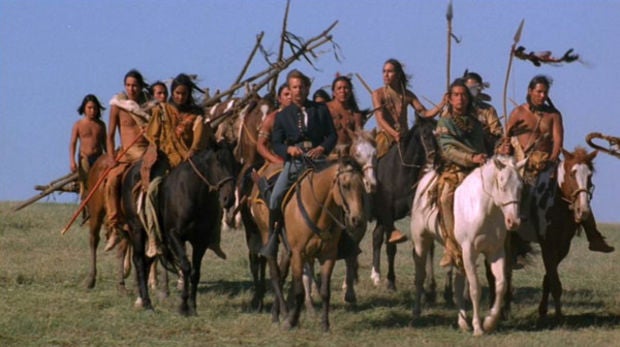 “Dances with Wolves” is one of my favorite films, and won an Oscar for Best Picture of 1990. You can watch it as entertainment, for which it serves well, or as history, where it fails considerably. The reason for the latter is simple: In DWW, every last white person, with the exception of Lt. Dunbar (its hero), is crazy, simple, sadistic, or otherwise a first-class son of a bitch. On the other hand the Sioux with which he becomes involved are kind, thoughtful, brave, loyal, peace-loving, and At One with Nature. Oh, they steal the occasional horse by way of recreation, and they’re puzzled by the wasichu, but that’s about as bad as it gets.

This is, of course, horsesh*t. The European colonists’ 300-year-long war against Native Americans was fought with extreme cruelty by both sides. In the 1760s Lord Jeffrey Amherst, for whom Amherst College was named (and who is now a source of embarrassment for that eminent institution), gave smallpox-infested blankets to the Indians during Pontiac’s Rebellion. The recipients of the blankets, having no resistance to the disease, died in droves. Lord Jeff eventually got himself a promotion out of it.

Things went downhill from there. Just about every tribe, east and west of the Mississippi, tortured, killed, raped, and enslaved anyone—white or red; it didn’t matter–who was unlucky enough to survive a battle and not be of their tribe. (For an eminently readable account of this subject, read Empire of the Summer Moon, a history of the Comanche wars and a work of careful scholarship by S.C. Gwynne.)

No American soldiers ever acted any worse than Colonel Chivington’s Colorado Volunteers in their massacre of Black Kettle’s village, but then the treatment of Custer’s fallen troopers after Little Big Horn is not recommended reading for the faint of heart or stomach. The Comanches were dreaded for their cruelty, but the early Texas Rangers who rode against them were no more inclined to mercy.

It’s an endless and depressing recitation of wrongs in a war of ill will on both sides. The Indians were more sinned against than sinning, but all the same you would not want to fall into the hands of Goyathle (Geronimo) if he were bored and looking for entertainment.

Since we started with the movies there are two that are pretty honest about this business. One is a small gem of a film called Ulzana’s Raid, which shows plenty of bad behavior on both sides.

In one scene, a cavalry detachment finds the body of a settler who has been tied to a fence by an Apache raiding party and had a fire started in his crotch. Appalled, the lieutenant commanding the troopers asks their scout, Macintosh, if he hates Apaches. No, says Macintosh:

“It would be like hating the desert because there ain’t no water in it. For now, I can get by being plenty scared of ‘em.”

The other film is Black Robe, an obscure and truly unusual film that takes place in Quebec in the 17th century. A Jesuit priest, Father Laforgue is being guided to the Huron tribe by Chomina, an Algonguin chief. The two are captured by the Iroquois and have very, very unpleasant things done to them, including running the gauntlet. More amusements are to come next day.
Chomina is asked if the Iroquois are not animals.

Neither of these films got an Oscar, but they are much better as history than the one that did.