Screeching, and Asking for It

A Mrs. P.T. of South Carolina, who is a longtime reader of this blog and a person of the highest... 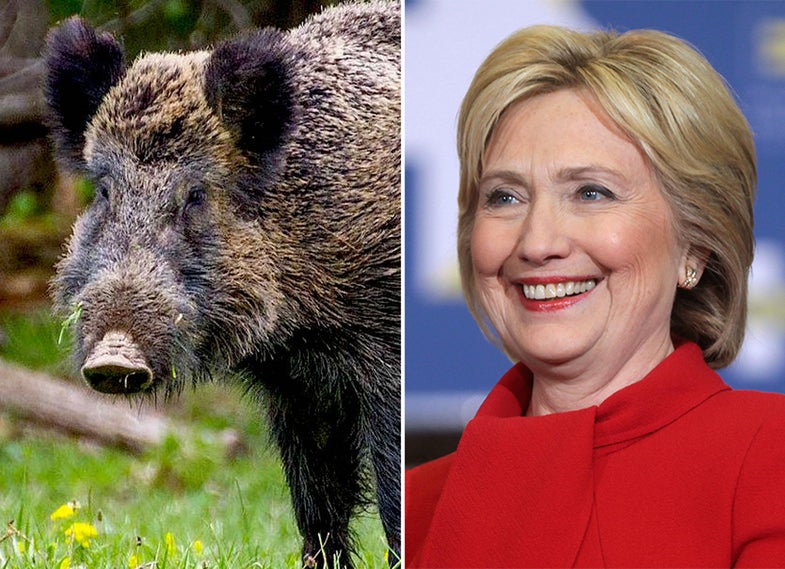 A Mrs. P.T. of South Carolina, who is a longtime reader of this blog and a person of the highest literary and moral worth, has asked me about Hillary Clinton’s predilection for shrieking, screeching, and caterwauling at the gullible souls who come to hear her sock it to a half-addled, elderly socialist, the NRA, Wall Street, Republicans, and other evil life forms. Mrs. P.T. is not alone in her concern over Clintonesque yowling, and yesterday, in connection with a dog story she was telling to a gathering in Nevada, Hillary yapped just like the furry meatloaf that lives next door to me and serenades me whenever I go outside. The yapping was much less objectionable than the screeching, and may be a sign that she’s morphing into some kind of new life form*. In any event, I feel compelled to put in my oar, as the saying goes.

Before the invention of the microphone, politicians who were not blessed with big voices did not have big careers. A politico was expected to speak for two and three hours at a time and project his words right to the back of a hall. You didn’t need a deep voice—Lincoln was a tenor whose voice was described as “trumpetlike”—but you did need a powerful one and know how to project it.

The invention of the microphone changed all that, but the fact remains that great speaking voices are as rare as voices that can take on operatic roles. Among women in politics, I can think of only two such. One belonged to the late Representative Barbara Jordan (D-Texas) who was profoundly gifted in many ways, not just vocally. The other is the property of Glenda Jackson, a British actress who began with the Royal Shakespeare Company, had a highly successful career on the stage and screen, and then went to Parliament.

Hillary, on the other hand, has been cursed with a voice that grates on the ear even at normal levels. It reminds you of every schoolteacher you ever detested, particularly the one who sent you to the principal’s office for farting in class. She shrieks probably out of desperation, and because she has never learned how to speak in public, and because she equates being deafening with being convincing.

Someone should play her a tape of Franklin Roosevelt, who had the greatest speaking voice of any politician in my lifetime, was an orator of immense power, and who never went much above conversational level.

I think Hillary sounds either like a) a panther screaming or b) a set of big-rig brakes whose pads have worn out.

You are invited to contribute your thoughts.

I had written earlier about Asking for It. In the local paper these last few days, there has been a case of this so wretched that I’m passing it along because it should give all of us pause. On the weekend of February 6, a 74-year-old Mainer shot a friend of his to death on a wild-pig hunt in south Texas. The friend was a 50-year-old Connecticut state trooper who chose to wear a black shirt while hunting an animal that is often black or dark brown. The hunt took place in the brush country on the Mexican border, which is so thick you can often see only a foot or so into it, or not at all.

The shooting occurred at dusk. The state trooper decided to flush suspected swine from a patch of brush and separated from his friend. He was crawling under a fence when the friend decided that what he saw was a pig and pulled the trigger.

The shooting has been ruled an accident. It is, in the sense that the Mainer did not mean to kill his friend. Otherwise, it is the Cascade of Errors, in which a series of failures of judgment leads to tragedy.

You don’t wear clothing that matches the color of what you’re hunting.

You don’t go crawling after wild pigs in heavy brush at dusk, or at any other time.

You don’t shoot at something you “think” you see. You either see it or you don’t. There’s no in between.

You don’t trust your eyes at dusk, especially if your eyes are 74 years old.

You don’t assume that someone who has been in law enforcement for 27 years, as the deceased had, possesses any more common sense than anyone else, if indeed they have it at all.

This “accident” took a truly amazing amount of poor judgment on the part of both men. Probably, if only one of them had s**t for brains it would not have happened.

*The ancient Egyptian deity Ptah, god of payoff and e-mail, was half human, half hyena. Who knows what miracles are taking place before our very eyes.