Shooting at a Gallop

Like all of you out there who can remember the Studebaker Avanti, I grew up on the Republic Studios westerns,... 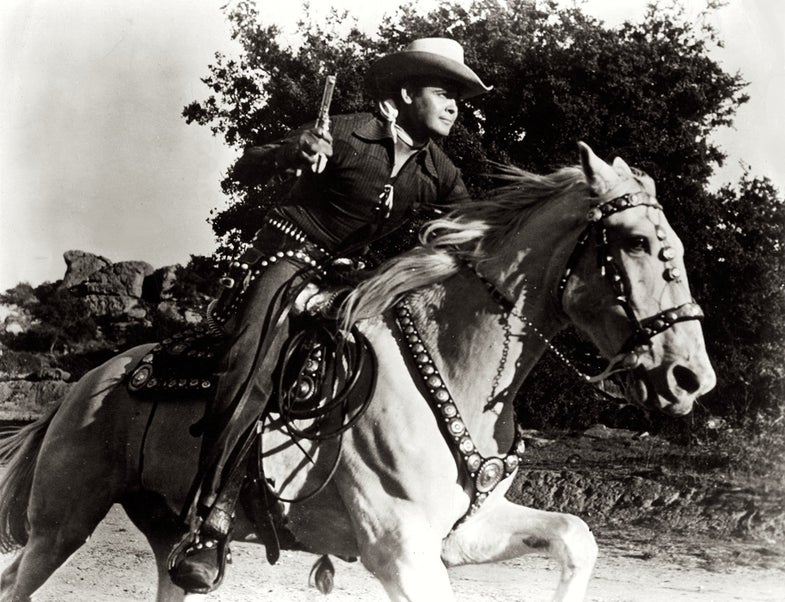 Like all of you out there who can remember the Studebaker Avanti, I grew up on the Republic Studios westerns, the old black and white films that ran perpetually on television and featured cowboys like Hoot Gibson, Tom Mix, Gene Autry, Roy Rogers, Monte Hale, Bob Steele, and others whose names now bring a tear to my rheumy eye. Even as a kid I knew these films were hokey. No one in the Old West dressed like that, or eschewed profanity, or fought with their fists when guns were available, or shot the guns out of the bad guys’ hands*.

But the thing that drove me craziest was the way they shot from horseback. They’d take their carved-ivory-handled, nickel-plated Peacemakers, and, at a dead gallop, cock them with the muzzle pointed at the sky, snap the muzzle down to 3 o’clock, and shoot. The horse did not have a seizure**, and they always hit what they aimed at. What nonsense, I decided; no one can shoot a revolver like that.

Flash forward 50 years or so to me reading Elmer Keith’s Sixguns, and what do I see but his advice on shooting from a galloping horse. Paraphrasing Ol’ Elmer, he said that because it was impossible to hold a handgun steady while on the deck of a running, halfwitted, half-ton animal, Indian fighters, cowboys, and other psychopaths developed the technique of snapping off shots, something like throwing a baseball. You brought your arm up, snapped it down, and pulled the trigger when the muzzle arrived at the point where you wanted the bullet to go. In short, you did exactly what Hoot Gibson and Tim McCoy did.

This shook me to the core because it made be realize I was wrong about something. But it made sense. Some of the old-time movie cowboys had been real cowboys*** and a lot of the old stunt men were as well, or knew them. Tom Mix, I think, was the real thing, and in fact was a pallbearer at Wyatt Earp’s funeral. So they did have a handle on how those cowpokes poked a pistol.

The only other authority I know on the subject of shooting from horseback is Winston Churchill who, as a Lieutenant in the 21st Lancers, participated in the Battle of Omdurman in 1898, one of the last cavalry-to-cavalry engagements. Churchill chose a Broomhandle Mauser over a cavalry saber, and said that if you wanted to shoot someone under these circumstances, it was advisable to actually touch him with the muzzle before you pulled the trigger.

It makes sense to me. Churchill was wrong about everything military from Gallipoli on forward, so by the law of averages, he was probably right about this.

*One of the people who believes in non-lethal gunplay is Fox News’ talking head, Judge Andrew Napolitano, who took exception to the Border Patrol’s fatal shooting of escaped murderer Richard Matt, despite the fact that Mr. Matt had a shotgun at the time. My opinion is that during his career the Judge should have gotten a badge and a gun and some time on the street; he would make more sense now.

** The reason Trigger and Champion and Tony did not have seizures at the report of a Peacemaker was because they were trained not to. If you try it, Old Thunderdent will put you in a full-body cast for 19 months.

*** Even the non-cowboy actors took some pains to learn how to ride convincingly. My riding teacher said the best Hollywood horseman was Randolph Scott. My vote goes to Ben Johnson, who was a rodeo cowboy before he started in movies.