SHOT Report: Top Rifles and Such

First, a few notes on what I do at SHOT aside from holding my breath at the appropriate times. In... 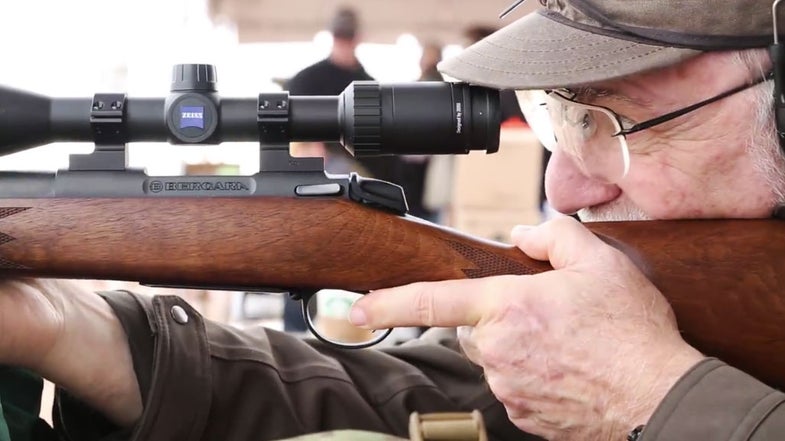 First, a few notes on what I do at SHOT aside from holding my breath at the appropriate times. In past years, I’ve been able to see the whole show through very hard walking and avoiding anyone who looked likely to speak to me. This year, I saw only part of it because I’m slowing down, a great deal of what’s there is not relevant to this blog, and I really can’t get excited about the 1,237th iteration of the AR-15 or the virtues of a new police baton that leaves no marks.

Some manufacturers I ignore. These are the ones that have sent me defective (or in a couple of cases, dangerous) products in the past, have been too lazy or indifferent to send me a gun, or have treated me in a manner that I would not wish upon the general public. Since I hold a grudge forever, this is now a considerable list. I tend to concentrate on those folks whose stuff has always been good, and who have paid attention.

I believe I have done my righteous duty if I can steer you to a comparatively few really good things rather than give you a laundry list of everything that people claim is new and wonderful, because very little of it is. So, without further dilly-dallying, shilly-shallying, or fiddle-f***ing, as First Sergeant Nielsen used to say, here we go.

Bergara is a Spanish barrel maker that began building complete rifles in the U.S. a few years ago under the stern eye of retired U.S. Marine Corps Master Gunnery Sergeant Dan Hanus, who, before he retired, headed up the U.S. Marines’ precision-weapons shop, where they turned out sniper and competition rifles. Bergara employed Hanus’s talents to produce beautifully made and hyper-accurate sporting and tactical rifles, which cost between $4,000 and $5,000, and which were made by hand.

In case you can’t afford one of those, Bergara has now begun making complete rifles in Spain on its own B-14 bolt action, a very slick, compact design with a coned bolt nose and breech, and a sliding-plate extractor. There are three B-14s: the B-14 Hunter, which has a synthetic stock, the B-14 Timber, and the B-14 Woodsman, which, as God is my judge, have wood stocks. Pillar-bedded albeit, but real, honest-to-goodness oil-finished walnut. All three offer a choice of hinged floorplates or detachable magazines, have nice, beefy #3 taper barrels, and come in a limited number of calibers. They are guaranteed to shoot M.O.A., but from my previous experience with Bergara, they will probably do a lot better than that. Prices, depending on model and caliber, range from $850 to $975. Remember the Good Old Days when guns were made by people who gave a s**t? This is how they made guns in the Good Old Days. Bergarausa.com

Montana Rifles was around for a number of years before people started to realize how good they were. Originally a barrel maker, Montana developed its own version of the Mauser 98/Model 70 action and is now making a wide variety of big-game, varmint, and tactical rifles. Most recent on the list is one that will not be generally available until the fall. It’s called the American Legends Rifle, and what a lovely firearm it is.

It will make your heart go pitter patter. The stock is AA grade black walnut, with a black grip cap and fore-end tip, graceful lines, and nice checkering. It’s one of those rifles that you can lean against a tree and admire if no game is showing up.

I’ve fired something like nine Montanas, in everything from 6.5×284 to .375 H&H, and without exception, they have been accurate and about as reliable as a firearm gets. Compared with the Montana, death is uncertain. People have caught on to this, and the company is growing at a dizzying rate. Montanarifleco.com

Weatherby has filled the 6.5mm gap in its line of magnums with a cartridge that will delight long-range shooters. It’s called the 6.5-300 Weatherby (What the hell else would you call it?) and though it comes in three different loadings, the one that I would opt for is the 140-grain Swift A-Frame, at just a hair under 3,400 fps. The A-Frame is one of the strongest bullets around, and you’re going to need all the structural integrity you can get at that kind of speed.

The advantage to the 6.5 diameter is that it makes for highly aerodynamic bullets that hold their velocity, and at the same time keep the recoil to levels that an average shooter can tolerate. The .300 Weatherby, with a 200-grain bullet, will shoot as flat, but it takes grim resolve on the part of the rifleman to manage one.

The Mark V rifle, which has been around since 1958, has also had a major overhaul with a re-contoured stock (they’ve gone back to the old, slimmer lines, which I loved), a brand new trigger that’s adjustable down to 2.5 pounds, and generally tighter tolerances all around. Weatherby’s Mark V action may be the strongest of any. The late Montana gunsmith David Gentry once tried to blow one up and failed. He could get the action to seize up, but after he pounded it open with a mallet it worked fine. You are not invited to try this.

Nosler has now pretty much completed its lineup of hyper-velocity, long-range cartridges with the addition of a .300 magnum and 7mm (shown). The .28 Nosler pushes a 160-grain bullet at 3,300 fps, while the .30 Nosler flings a 210-grain AccuBond Long Range slug downrange at 3,000 fps. I used to shoot 200-grain bullets from a .300 Weatherby at around 2,900 fps, and they never seemed to drop. It was uncanny. God only knows what this round will do. Nosler.com