The first movie I ever saw in my life was a Roy Rogers western called My Pal Trigger, and by... 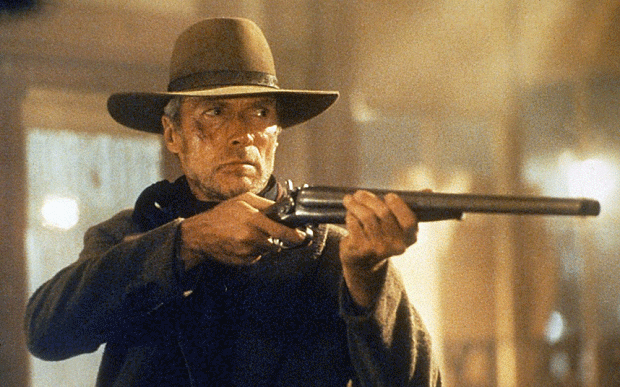 The first movie I ever saw in my life was a Roy Rogers western called My Pal Trigger, and by the time I hit my teens the TV western was in full bloom. (“With all those horses on the screen, how come the streets are so damn clean?” asked Lee Hays of the Weavers.) Already afflicted with the problem of reading too much, I studied up on the subject of gunfighting in the Old West, and with much difficulty—there was very little about it at that time that was accurate—came to the conclusion that very little of it had anything to do with reality.

Reality, it seems, did not make for satisfactory cinema. The Searchers, which is not only a great western, but a great movie, has very little to do with Texas in the 1860s, or reality, for that matter. The Magnificent Seven is wonderful entertainment but complete nonsense. More recently, Tombstone falls into this category, including a version of the Gunfight at the OK Corral in which a lot of stuff never happened. (It’s great fun, however, to watch Val Kilmer as Doc Holliday steal the movie.)

One, or both participants were usually drunk.

Much of the time, the ammo failed to fire. The revolver that killed Wild Bill Hickok held six rounds, and only one of them went off.

Backshooting was a common solution to interpersonal conflict. It was much safer, especially if the guy who wanted to kill you was better than you were. Johnny Ringo (Ringgold) was shot in the head from behind while sleeping off a drunk in the shade of a tree.

In many Old West shootings, one man was a skilled professional and the other was some poor sap who had let his alligator mouth overload his hummingbird ass and paid for it with his life. The shooting in Shane where the gunfighter Wilson provokes a dirt farmer into going up against him and slaughters the man like a hog is pretty close to the truth. But as for Alan Ladd in his fringed buckskins and silver-concho gunbelt, gimme a break.

Indeed, in a lifetime of western-watching I can recall only two films that have been accurate from beginning to end. One is The Culpeper Cattle Company, a low-budget, no-name cast film that barely did better than break even at the box office. It will make you want to get good and drunk, and is best summed up by the Company’s cook, a misanthrope who claims that “Cowboyin’s somethin’ ya do when ya cain’t do nothin’ else.”

The other film is at the other end of the scale, and I speak with awe and reverence of Unforgiven, winner of four Academy Awards, boffo at the box office, and voted into the National Film Registry for its cultural significance. It is as though the writer, David Webb Peoples, set out to systematically demolish every gunfighter movie myth ever made.

There’s only one gun mistake in it. The film is set in 1880, but makes a reference to “.30-30 shells,” which was pretty prescient because the .30-30 would not be invented for another 12 years. But otherwise, Clint Eastwood and company got it all right. The “hero” killed men, women and children, has a broken-down horse that hates him, and is a lousy shot with a rifle. The “villain” is a sadist, a monster, and an authentically brave man. A cowboy gets killed in an outhouse. The Schofield Kid, gunfighter in training, kills, and is sickened by it.

Wonderful. If they had shown Unforgiven in 1955, there would have been riots, and an investigation by the House Un-American Activities Committee. John Wayne would have denounced it.

We have come a long way.