When I worked at the Field & Stream office, and could get my hands on all the bound volumes of... 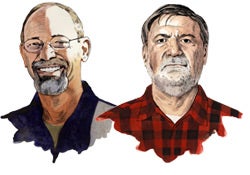 When I worked at the Field & Stream office, and could get my hands on all the bound volumes of the magazine going back to its founding, I became a particular fan of the issues that were published during World War II, the last war against a qualified opponent that we won. The war dominated everything, especially the ads. Most of them would now be politically incorrect. We hated and feared the Japanese and the Germans, and said so, but what really stands out is the line that occurs over and over: “When we get the job done; when we kill the last Nazi…”

There was no demand that “the government keep us safe.” If you had said that people would have looked at you as if you were mad. “What the hell are you talking about, mac? We’re the government. Who else is going to do it?”

Similarly, at the Democratic Convention, Senator Tim “Freebie” Kaine, formerly Governor of Virginia (where he accepted $160,000 worth of stuff in return for…?) gave a “Semper Fi” shout out to his son who is a Marine Corps infantry officer. There was a long moment of uneasy silence from the assembled multitude. Could this be another Democrat contender going mad before their very eyes? Then it became clear. No one had a clue what “Semper Fi” meant.

I can guarantee you that if you asked the average college student what it means, 2 out of 1,000 might know. If you asked the question of high schoolers, the score would be zero, except for the fraction of 1 percent who plan to join the Corps, and even then, who can say?

And if you checked them out on “Gung Ho,” I doubt if even the Jarheads know about that these days.