Tagging Out Early on a Turkey Hunt

One of Field & Stream’s writers — Sam Curtis, I think it was — once wrote that there is nothing... 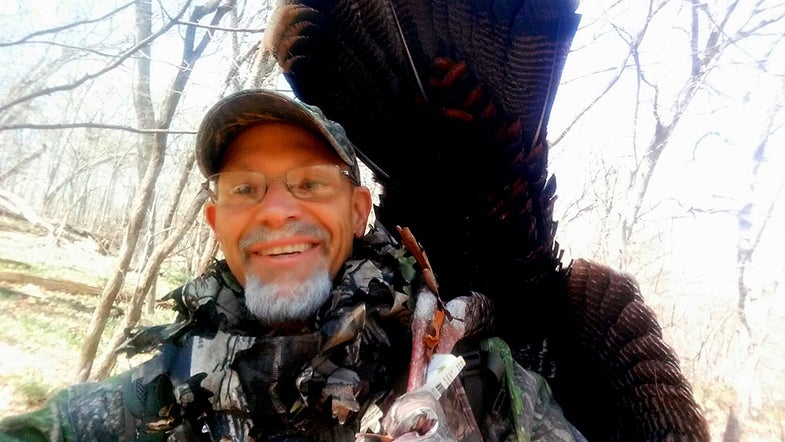 One of Field & Stream’s writers — Sam Curtis, I think it was — once wrote that there is nothing better than the feeling of sleeping in the morning after you fill your tag. Much as I might like to be hunting on this perfect morning, I can’t hunt for six days, and for the best possible reason: I tagged out on the first day of a seven-day split. That was a few days ago, and I find, after two turkeyless years, that I am completely happy to wake up in the dark, remember why it is I can’t go hunting, and fall back into a contented sleep.

Fortunately I have another tag for a later split, and just about the time the buzz from my successful hunt fades, I’ll be able to go again. Meanwhile, my one day of turkey hunting is going to sustain me for quite a while. I can’t stop thinking about the sound of the gobble when I struck the bird. I had hunted all morning and was walking through a beautiful stand of mature hardwoods on public ground I had never hunted before. I yelped quietly and my soft call sparked one of those pin-your-ears back gobbles that is more roar than rattle. The turkey was so close – maybe 70-80 yards away – that the gobble sounded like a shrill thunderclap.

My first instinct was to bolt for the nearest tree, but I kept reasonably calm, located a big tree, tiptoed over to it, sat down and got the gun up. I yelped again. No answer this time, and I had a sinking feeling that I’d scared the bird away despite my best effort to be stealthy. I scratched in the leaves to sound like a feeding hen. A moment later, here he came in full strut. At 35 yards the turkey stepped up on a fallen log and displayed like a giant ruffed grouse on its drumming log. After standing there for what seemed like forever but was probably no more than 60 seconds while I tried to find a clear lane through some saplings to shoot, the tom turned and strutted the length of the log. I pulled the trigger when I had a clear shot at the bird’s head. From gobble to shot, the hunt took no more than five minutes, but they were five of the best minutes I’ve ever spent in the turkey woods.

I have eaten tags. I have tagged out on the last day of the season a few times, which is the ideal situation in terms of both getting a bird and getting to hunt a lot, if a little nerve-wracking. Tagging a bird right away is a fairly novel experience for me. I thought I wouldn’t like it, but right now, I don’t mind not being able to hunt at all.