Photo courtesy of Birchwood Casey Of the three shooting disciplines—rifle, handgun, shotgun—I’ve long been convinced that the handgun is the... 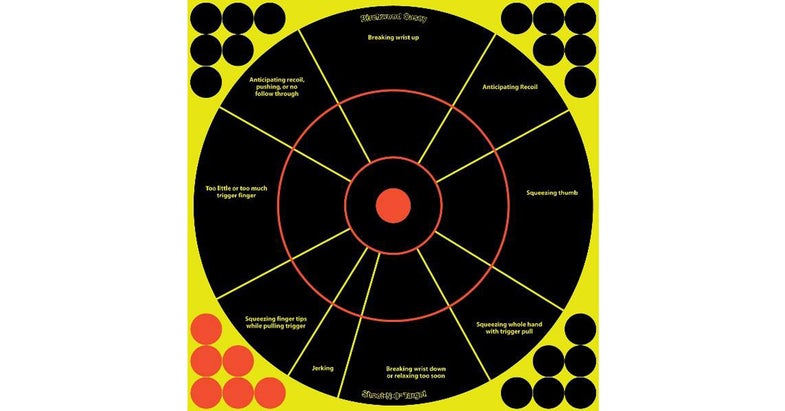 So, here is a really good idea from Birchwood Casey. They’ve come up with the Shoot-N-C Handgun Trainer, a 12-inch repairable target with the bull’s-eye surrounded by nine segments, each representative of a common shooting error. For example, if your shots are landing in the 6 o’clock section, you’re guilty of breaking your wrist downward, or relaxing too soon. At 9 o’clock, your problem is too little or too much trigger finger. At 5 o’clock, squeezing your whole hand with your trigger pull.

I tried out these targets with a double-action revolver, fired both double- and single-action, and my SIG-Sauer 1911. Since they’re small targets, I shot at them from 7 yards, which I think is about right for most people. The way to use them is to fire at least three cylinders or magazines worth of ammo before you draw any conclusions. You’ll see a pattern emerge, as most people tend to do the same dumb s**t over and over. In my case, every time I got out of the center the shot went low, which meant I was breaking my wrist and/or jerking. This was the correct diagnosis. When I bore down hard on my wrist, the shots stopped heading south.

Shoot-N-Cs come in packs of five for $12.70. There are 24 patches on each target, so you can use each one three times. These targets are a very good idea, cost very little, and can help you a lot.