Anyone who’s going to write about this most mysterious of American artifacts had best be prepared to use the words... 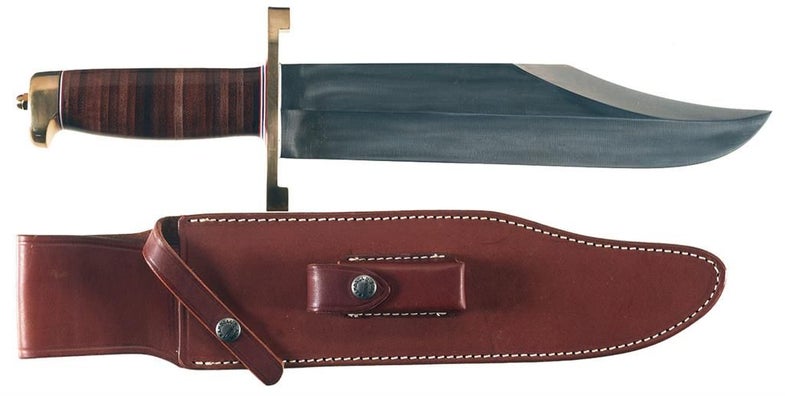 Anyone who’s going to write about this most mysterious of American artifacts had best be prepared to use the words “probably,” “possibly,” “maybe,” and “could have” in every sentence. The fog of history long ago shrouded Jim Bowie and his knife, and while we know what the man looked like—there are paintings done in life—we have only clues as to the appearance of the snickersnee that he made famous.

Bowie was one of the frontiersmen who became a legend during his lifetime, along with David Crockett (He detested “Davy”), Buffalo Bill, Kit Carson, and a host of gunfighters, thugs, and other bad actors. All sorts of nonsense was published about him, and much of it became fact. Jim Bowie was notably closed-mouthed, but his brother Rezin had all sorts of stories to tell, most of them conflicting.

Bowie was born in Kentucky, probably in 1796, and his family later moved to Louisiana, where Bowie grew to be 6 feet and 180 pounds, which was very big for the time, and enterprising. He was variously a timber and land speculator, a slaver, maybe involved in piracy, fond of gambling, and always willing to kill whoever disagreed with him.

The one fight in which he is known to have taken part took place at the Vidalia Sandbar in 1827. It began as a duel, and Bowie was there only as an observer. After the duel, some of the other onlookers decided that they, too, should contribute, and in the course of the discussion Bowie was shot in the hip, clubbed to his knees with a pistol, stabbed in the chest with a sword cane, shot a second time, and stabbed a second time. In the course of all this Bowie grabbed the man who had stabbed him with the sword cane, Major Norris Wright, and disemboweled him.

Bowie lived, to everyone’s astonishment, and survived to be a popular hero. But no one knows for certain what he did the disemboweling with. Bowie went on to die at the Alamo in March, 1836, but his knife, or what people thought was his knife, went on to become an indispensable part of frontier equipment. The Paterson Colt was just over the horizon, and the only powder-burning sidearms were single-shot percussion pistols. The knife, to many, made a better choice.

Probably, the Bowie was a big, heavy knife with a blade at least 9 inches long. Probably it had a clip point and a sharpened false edge. Probably it had a double-quillon guard. Home-made Bowies were forged by the thousands. In England, Sheffield, the national cutlery center, turned out mostly ornate and fairly useless Bowies which were shipped to the U.S. Here, a small number of commercial cutlers such as Daniel Searles made beautiful Bowies that are now worth small fortunes.

During the Civil War, Confederate soldiers carried monstrous homemade Bowies that were as big as swords and often had D-guard handles. Yankees, being more effete, did not go in for the trend. The heyday of the Bowie lasted roughly through the end of the War of Southern Miscalculation. By then, the revolver had reached such a high state of development that the phrase “bringing a knife to a gunfight” had probably been used to death.

But the Bowie lives on. The Rambo knives are all Bowies except for the very last movie in the series. The most successful military knife of all time, the Ka-Bar, is a scaled-down Bowie. If I had to pick a modern knife that pretty well replicates what Jim Bowie carried at the Alamo, I’d go for the Randall Smithsonian Bowie.

And what of the original, the one at the side of the man who lay dying of pneumonia, waiting for the soldados to come and kill him? No doubt it was taken by one of them, and may still be alive and well in Mexico, doing something peaceful for a change.