Photograph by KnifeArt.com The great custom knife boom has been booming away since the early 1970s, and shows no signs... 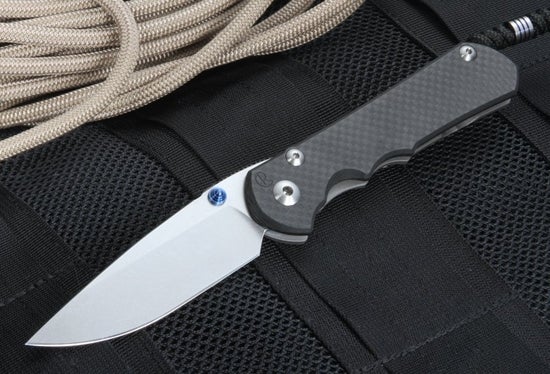 The great custom knife boom has been booming away since the early 1970s, and shows no signs of dying down. Thousands of smiths have been involved in it, most from the United States, some from Japan, and Germany, and a very large number of the very best from South Africa. Three of these whom I know, and who rank at the top, are Owen Wood, Arno Bernard, and Chris Reeve.

Reeve is an interesting guy. He got his start as a motorcycle racer and began making knives in his garage in 1984. What got him noticed was his “one-piece” knife—an ingenious solution to the problem of building the hollow-handle knives that were then in vogue. Rather than soldering a flat steel blade to a tubular piece of aluminum and hoping the solder held under stress, Reeve machined an entire knife from A2 (air-hardening) tool steel that was milled as a solid, round bar. He ground the blade flat, drilled out the handle, checkered it, cut screw threads in the butt, and made an o-ring-sealing cap. You could whack and hack with one of these until hell froze or your hand wore out. How were you going to damage the knife? It was as solid as a railroad spike.

Reeve made a whole line of these knives from fighters to hunters, and they immediately attracted a lot of attention.

(A side note: Reeve stopped making one-piece knives when his supply of A2 bar stock dried up. They have become quite scarce, and quite expensive. If you see one, and can afford it, grab it.)

In 1989, he moved to the United States, settled in Boise, Idaho, and eventually got into making folders. Twenty-five years ago he introduced the Sebenza (all of his knives have Zulu names; sebenza means “work,” which gives you an idea of what he had in mind when he designed it), a full-size knife that caught on and stayed caught.

To celebrate its anniversary, Reeve is offering exclusively, through a company called KnifeArt (KnifeArt.com) a special edition Sebenza with a carbon fiber handle that makes it very light. This model is called the Sebenza Carbon Fiber 25. The 3.6-inch drop point blade is made of CPM S35VN steel hardened to Rc 58-59 and the frame is machined from titanium.

Sebenza Carbon Fiber 25 is a one-hand-opener, a framelock whose design puts the entire frame behind the blade. The blade pivots on phosphor-bronze washers, and there is a 1/8-inch ceramic interface between the blade and the frame, which makes it just about impossible for the blade to wear loose over time. Sebenza Carbon Fiber 25 weighs just 4 ounces, and you can carry it in your pocket.

Because Mr. Reeve earnestly expects that you will use his knife, he packages it with Allen wrenches for disassembly and cleaning, oil for the joint (oil is always a good idea) and a polishing cloth. The price is $485 for about as nice a piece of cutting machinery as it is possible to buy.

A word about KnifeArt. They deal only in new knives, and carry cutlery that you just don’t see anywhere else. Sebenza Carbon Fiber 25 is exclusive with them, and they are also the only place I know of where you can find a new Daniel Winkler tactical knife. They carry roughly 20 different brands, and every one of them is top flight. Nice folks to deal with, too.