As we all know, the Doughboys of World War I made the Kaiser dance with that quintessentially American bolt-action, the... 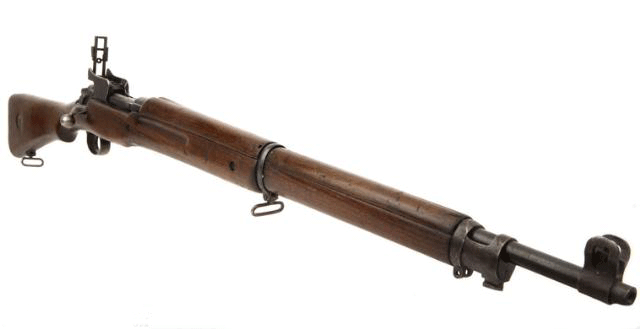 As we all know, the Doughboys of World War I made the Kaiser dance with that quintessentially American bolt-action, the Model 1903 Springfield. This included Sergeant Alvin York, who won his Medal of Honor with an ’03 and a Model 1911 Colt. Right?

Wrong. The truth is that our main battle rifle in the War to End All Wars was a long, heavy, unglamorous piece of machinery that was actually designed by the British—the U.S. Model 1917 Rifle, more commonly called the P-17 Enfield.

In 1910, as a result of having the hell shot out of their troops by the Boers, who were armed with Mausers, the British redesigned their Short Magazine Lee Enfield, which was chambered for the old, slow, .303 cartridge. The new rifle was called the P14, and it was chambered for a radical new .276 cartridge with nearly 300 fps more velocity. It was a longer, heavier rifle than the SMLE, but it had a superior aperture sight, protected by two “ears” on the receiver, fewer parts, and easier disassembly.

But then in 1914 came World War I, which everyone assumed would be over in a few months at most, at which time all concerned could go home for tea and medals. When the initial slaughters were over, the British realized that: a) they would have to raise a huge standing army and b) they did not have nearly enough rifles to equip their soldiers. So they retained the .303 SMLE as their main rifle and contracted with American manufacturers to turn out P14s in the meantime. But as it turned out, Britain produced enough SMLEs so its troops could die in the tens of thousands suitably armed, and cancelled the American contracts for the P14.

Then, in 1917, came our turn, and as the world has learned, when it comes to unpreparedness in getting into a war, no one does it like the good old USA. We didn’t have enough troops, or uniforms, or campaign hats, or gas masks, or rifles. Especially rifles. Only the Springfield and Rock Island Arsenals were producing ‘03s, and they could not possibly turn them out in time to arm the 4 million men who were being called up.

And then someone remembered that we had factories already tooled up to produce P-14s. They weren’t chambered for the .30/06, but that was easy to fix, and by the time the war ended, we were cranking out 10,000 P-17 Enfields a day.

And they were good military rifles—very robust and very accurate. Their main drawbacks were weight—9.3 pounds unloaded, 11.1 pounds with sling, bayonet, and oiler—and length. The barrel was 26 inches long, total length, 3 feet, 10.25 inches, and when you fixed the Model 1917 bayonet with its 16-inch blade, the thing was almost useless in the confines of a trench.

But the P-17 did very well. Just under 2,200,000 were made, and the rifle served not only in World War I, but World War II, and in a limited way in Korea. The Department of Civilian Marksmanship got its share, and in the 1930s civilian gunsmiths discovered that the big Enfield action could be converted to use with magnum cartridges. You had to grind off the ears that protected the rear sight, and do something about the double-stage trigger and the cock-on-closing action, but when you were done you really had something. One rifle that haunts me to this day is a Griffin & Howe .416 Rigby built on a P-17 action. It was a dead-plain working gun, but G&H did everything right, and if it were left-handed I would have bought it.

I should also add that the worst rifle failure of which I have personal knowledge involved a P-17 that maimed a range officer. He had just bought the rifle out of surplus, and it very likely had the original Cosmoline in the barrel. He chose to shoot some handloads a friend had given him, and they may or may not have been defective, but the action burst, and the extractor flew off and gouged out one of his eyes. Later, he lost sight in the other one as well, and the huge doses of steroids the doctors gave him to try and save his sight destroyed his hip joints. The P-17 is strong, but there’s a limit to everything.