The Return of Browning Ammo

Long ago when disco was king, Browning decided to expand its horizons and make everything connected with sports of any... 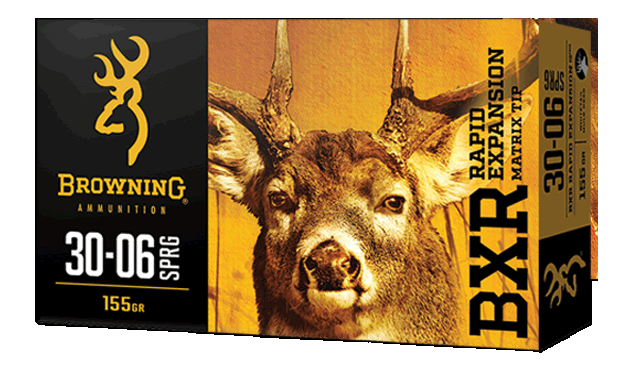 Long ago when disco was king, Browning decided to expand its horizons and make everything connected with sports of any kind, even going so far as to produce vaulting poles (I understand that an Olympic medal was won with one). Among this plethora of products was ammunition. It came packaged in attractive gold and black boxes, but was otherwise undistinguished, and died out after a while along with the vaulting poles, croquet mallets, tennis rackets, SCUBA gear, and badminton birds.

Browning learned that it should stick to the outdoors, but since the rule in business is grow or perish, it has decided to try ammo again, and this time the story is very different. There are lines for big game, waterfowl, upland, personal defense, target shooting, and rimfire, but because this blog is mostly about rifles, we shall limit ourselves to big game.

Browning has opted to use non-standard bullet weights; each of the BXR and BXC slugs is a few grains heavier than standard which gives a more aerodynamic profile and a higher ballistic coefficient. The BXR bullet employs a matrix tip of copper and polymer; it’s designed to transfer all its energy to critters such as deer and antelope. The BXC is for elk, moose, and bear. It employs a brass (!) tip and a bonded core to get through to the old boiler room. Why brass? Because it’s tough, machinable, and cheap. This is the only instance of an ammo maker using brass for its tips that I know of.

I got to use the BXR ammo, and watch it at work, on a recent Browning-sponsored trip to Wyoming. We were issued Browning X-Bolt rifles, all in .30/06, with Leupold scopes, all firing the 155-grain BXR Matrix Tip bullet. The idea here was to get a bunch of people who could shoot into enough game so that Browning could draw some conclusions.

Of nine deer that were shot, between ranges of 100 to 350 yards, none required a second round, and none traveled more than 50 yards after being struck. Of the nine hits, at least half were through- and throughs, which means that there is some penetration in reserve in the BXR bullet.

My deer, an attractive 200-pounder, was hit smack on the point of the shoulder at 140 yards and was literally slammed to the ground. I’m making a point of this because only twice before have I seen an animal put down with such violence. One was a Cape buffalo hit by a .458 Lott and the other was a red stag that fell victim to a .338. It was like a giant hand reached out of the ground, grabbed him by the muzzle, and yanked. His heart was completely severed and both lungs were demolished. The bullet exited the far side.

Because ammo is in short supply right now, and my range is closed for remodeling, I can’t do any of the target shooting, chronographing, or conventional expansion testing that comes with a report like this. But I can tell you that Browning is obviously into something very interesting here, and I look forward to seeing how the rest of the story unfolds.