The Year of the Folding Knife 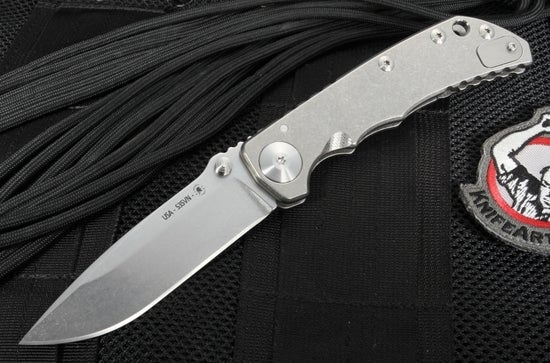 According to the Chinese zodiac, this is either the Year of the Monkey or the Year of the Presidential Candidate, the former ranking somewhat higher on the evolutionary scale. It’s also the year of the folding knife; really good ones keep popping up faster than you can say “brokered convention.”

First on the list is the Harsey Folder from Spartan Knives, who specialize in tactical cutlery, and while this one is classified as military/police, it looks to me like a dandy hunting/utility knife. It’s a big, solidly built framelock with a massive hingepin and a 4.25-inch drop-point blade made of S-35VN steel. The handle, as well as all the hardware, is made of titanium, so despite its considerable size the Spartan Harsey Folder weighs only 5.9 ounces. The entire knife has a “stonewash” finish, which hides small nicks, dings, and blemishes. I mentioned lovely machinery some time ago? Here’s lovely machinery. The price is $460, and it’s available from Knifeart.com/Spartan-harsey-folder. From what I gather, KnifeArt does not get a lot of these, and they go quickly.

Cold Steel makes the widest range of cutlery and edged weapons of any company I know of. Lynn Thompson, the guy who runs the show, describes himself as a Master at Arms, and he is just that. He is also a fanatic about quality. Cold Steel uses no fewer than 15 cutlery steels for its various knives and assorted implements of mayhem to get exactly the kind of performance he wants.

Most Cold Steel knives are easily affordable. Notably, the company makes the best truly cheap hunting knife I’ve ever used. It’s called the Pendleton Lite Hunter, and is a drop-point fixed blade knife that costs $19.99. As I wrote when the Lite Hunter won a “Best of the Best” award a few years back, the price is a distraction from how good a tool this is. If you’d like something a little fancier, also designed by Lloyd Pendleton, there is the Custom Pendleton Hunter which has the same lines and size, is of true custom quality, and costs just under $400.

For this year, the new Cold Steel models of note are the Lucky, which is a penknife on steroids, and the Ultimate Hunter, a lockback folder designed expressly for use on game.

Pen knives date from the time when people wrote with goose quills, whose points had to be sharpened frequently, and the knife people used for this was a small one-blader. The goose quills eventually disappeared, but the small knife that trimmed them proved to be a very good idea and is with us today.

Lucky is large for a penknife, and comes with two, not one, blades. There’s a semi-skinner at 2 inches long and a serrated edge at 2 5/8 inches (Colt Steel has its own version of the serrated edge, which can best be described as scary.) both ground from CPM35VN steel. The handle scales are G-10, and the weight is just over 1 ounce. Lucky comes with clips for right- or left-hand carry, and retails for $94.99.

Ultimate Hunter is a 3 ½-inch drop-point lockback whose blade is made from a dedicated cutlery steel called CTS-XHP whose properties sound like an updated version of D2. The handle scales are G-10, and the knife utilizes the company’s Tri-Ad locking system, which operates on the same principle as the L.C. Smith shotgun’s lock—the more it wears, the tighter it engages. There’s an excellent, detailed explanation of how this works in the Cold Steel catalog. The weight is 4.9 ounces and the MSRP is $189.99.

If you like knives, and related sharp objects, the catalog is an absolute hoot. It’s filled with stuff like the Special Forces Shovel (an upgrade of the Spetsnaz entrenching tool) which can dig you out of a snowdrift, scoop a cathole, or take off an arm with equal facility. You can read about all these wonderful things at coldsteel.com.