Hiding from game – ducks, geese, turkeys and deer – is both a challenge and part of the fun of... 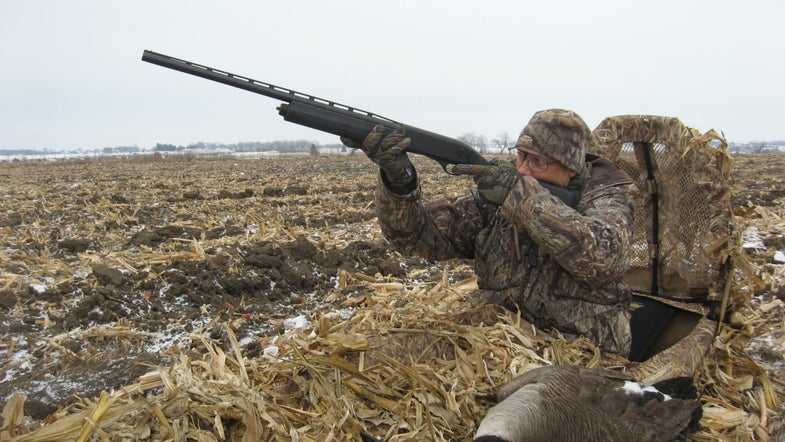 Hiding from game – ducks, geese, turkeys and deer – is both a challenge and part of the fun of hunting.

I hunt with people whose approach to hiding ranges from the lackadaisical to the obsessive. Personally, I’m in the middle and probably closer to the lackadaisical side than I care to admit. Sometimes hiding makes all the difference, sometimes it hardly matters at all. We can all tell stories of times game came right up to us when we were in plain sight, standing around outside the blind, whatever. Yet we have all been there on other occasions when animals spotted us even when were well hidden and completely still.

How much you need to hide can even change during the course of a day. Yesterday afternoon, for instance, four of us hunted a snowy field for ducks and geese. We had two hunters sitting up against backrests and holding still but they were highly conspicuous. Two of us were in layout blinds. The blind I brought looks like a refrigerator that has fallen on its side once you put a snow cover on it. The other blind had no cover. All in all, we were not a well hidden crew.

At 1:30 in the afternoon, ducks and geese shunned us. They never flared hard but they would come close and slide off or sometimes gain elevation, a good sign that they see something that bothers them. But, it was cold, and at 3:00 birds had to feed before night. Animals know cold is a much deadlier enemy than any predator and they will become less cautious when they are hungry. Ducks and geese began decoying perfectly. I had a hen mallard leading a flock into the decoys almost land on my blind at one point before she finally busted me at range of about three feet. That would never have happened earlier in the day.

The obsessive hiders would say there is no harm to hiding better, and that’s usually true except for two things: they are annoying to hunt with and, sometimes you can be so well hidden you can’t see or shoot. Several years ago on a waterfowl hunt in Canada we had a guide named Darrel, whom I nicknamed “the chaff Nazi.” Darrel was actually a ski instructor but he would guide hunters until the ski season started. Someone had evidently told him that hiding was the key to killing ducks and geese, and he would rake up huge piles of pea chaff from the fields we hunted and heap it on our blinds. If you stuck you hand out of the blind, Darrel would run over and throw chaff on it. The problem with all this chaff Darrel heaped on us was that pea chaff has dried peas in it, peas exactly the right size to wedge in between the back of the trigger of a Benelli Super Black Eagle and the trigger guard. When that happens, you can pull the trigger as hard as you want and it won’t budge. It happened to me twice on that hunt.

You can be too well hidden.