Note: A number of you have been kind enough to enquire when the story of my encounter with the dugga... 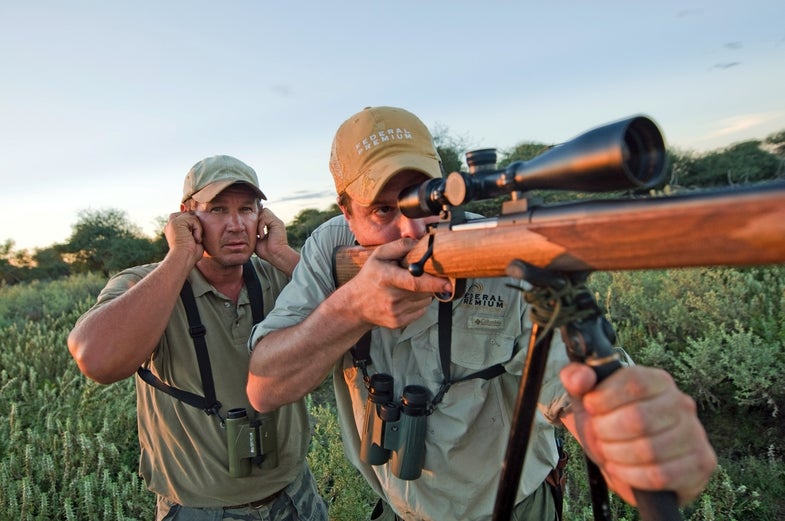 In Africa brush country, most shots are taken from the standing position. A tripod can mean the difference between a clean kill and a wounded buffalo.. John Hafner
SHARE

Note: A number of you have been kind enough to enquire when the story of my encounter with the dugga boy will appear. Well, I have good news and bad news. The good news is that it’s written, and the reviews have been ecstatic:
“Thrilling and hauntingly beautiful.”

“If Hemingway had read this, he would have blown out his brains years earlier.”

“Peter Hathaway who? Robert Chester who?”

The bad news is, that if I understand correctly, you ain’t gettin’ it here. The article is scheduled to run later this winter in Field & Stream magazine.
Nonetheless, we shall continue to nibble around the edges.

In Africa, missing a shot or hitting badly can have highly unpleasant consequences. If you wound a Cape buffalo bull for example, and he gets away, it will cost you $5,000, and you run the additional risk of having your guts stomped out, or your PH or your trackers getting their guts stomped out.* Since most African shooting is done offhand, and since this is the most difficult of positions, and since most of their clients (particularly Americans) couldn’t shoot from offhand, PHs have adopted the use of tripods to reduce the carnage.

Even though I’m still a pretty good offhand rifle shot, when Buzz Charlton said he preferred I shoot off a tripod, I didn’t balk, because the rule is that you play by the PH’s rules. If Buzz wants a round in the chamber whenever we track something, fine. If he wants me to use a tripod, that’s fine also.

The reason is simple. This isn’t some sort of game. Buzz has a wife and two little daughters whom he would like to see again, and if I stand on my vanity and shoot something in the guts, he’s the one that has to go in after it, not me. Then there’s the question of making an animal suffer for days or weeks because you wanted to show what a hell of a shot you were.

The way things work in this brushy country, you find yourself watching a herd hidden among the thorns and concentrating on an open patch of a few feet where you hope something shootable will eventually wander. Then you get maybe a second or two to pull the trigger. You can watch with a binocular, but the time you lose putting it down, grabbing your rifle, getting it positioned and acquiring your sight picture is usually enough to cost you the shot. The only practical thing to do is keep the rifle up and be ready to fire at an instant’s notice.

On one occasion Buzz and I watched a thicket for 45 minutes, waiting for something to happen. As it turned out, nothing did, but waits like this are not unusual, and if you can hold an 11-pound rifle steady in the offhand position for 45 minutes, I will shake your hand.

In the past, I spurned the use of a tripod because a tracker followed me with it, and by the time we both got our choreography straight the chance was gone. Buzz, however, walks ahead of the client and sets up the tripod before you get there. He finds out in advance how high you need it, so all you do is step up and slap the rifle down.

Buzz’ tripod is an old wreck that’s held together with duct tape, but I consider it to be a good friend of mine. If snipers use bipods, why can’t hunters use tripods?

*Buzz told me a particularly horrific story of a PH he knows whose client wounded a buffalo which then charged the client. Being honor-bound to do so, the PH ran between them and, for his trouble, received a horn right where the moon don’t shine. He managed to kill the buff, and then, pouring blood and in indescribable pain, walked 3 km to his truck and drove himself to the hospital. He recovered, stayed out of hunting for two years, and then went back to it because he found everything else boring.

There’s an ironic twist to this story. The buffalo that did the goring had one horn that was much shorter than the other one, and this was the one he used. If he had hooked with the longer horn, it would have been fatal.

On another occasion, Buzz saw a buffalo shot badly that turned on a villager who just happened to show up at the wrong moment. The animal held him down and pounded his chest with his boss, completely pulverizing the man’s upper body.