Throwback Thursday: Phil Kills a Deer with a Bow (and How Hunting Was Different in 1988)

A friend of mine sent me this picture the other day. He’s been scanning boxes of family photos with the... 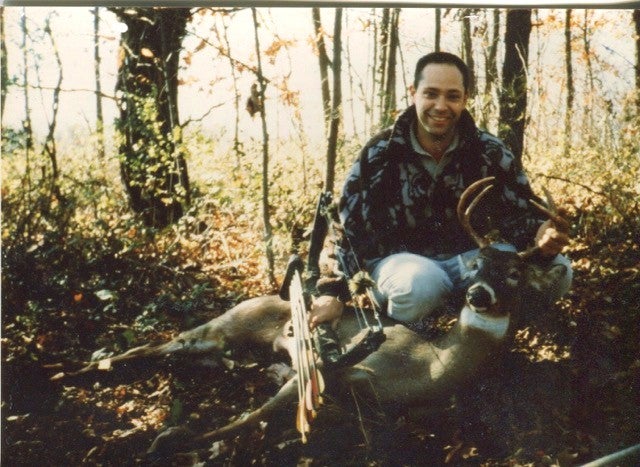 A friend of mine sent me this picture the other day. He’s been scanning boxes of family photos with the scanner he got for his birthday. He came upon this picture of me, circa 1988, when I was 30 years old and my wife was pregnant with our older son. For you kids reading along, it used to be that you took pictures with a “camera,” then took the “film” out and dropped it off somewhere to be “developed.” Then you put pictures in an “envelope” and “mailed” them to someone. Phones were not involved. This is one of the things that was very different about 1988 compared to today. Frankly, I like today’s system a lot better.*

Another difference: back then, if you shot a buck like this little basket-racked 8, people sincerely congratulated you. No one said anything like: “You’re killing your future when you shoot a buck like that.” The deer population explosion was still a novelty and every deer was still a trophy. That’s something I think was better about 1988. Back then, Iowa was debating whether to allow non-residents to hunt deer. We were landowners then, and my mom was convinced that letting out-of-staters buy deer licenses meant we would be overrun with hordes of hunters from Minnesota and Wisconsin. “Relax, mom,” I said. “Who’s going to pay $250 to come to Iowa to hunt deer with a shotgun when they can stay home and hunt with rifles?” Okay, so I was wrong about that one. I had no idea we would become a trophy deer mecca. Now it costs $500 to hunt here. The hordes my mom feared never materialized, but the leased and off-limits deer woods we never thought about sure did.

You will notice, I hope, my awesome Trebark fleece jacket. It was a birthday present from my wife. Trebark was the first non-military based actual hunting camo I was aware of and the jacket was the first real hunting camo garment I owned. At the time I thought it was the coolest thing in the world. Looking at the picture, I still think it’s pretty cool.

My bow was the bottom-of-the –line Browning compound, basically just a recurve with wheels on the end. Browning called it the “Cobra” and it had a 60-pound draw weight with 50% let-off. Like almost everyone else back then, I shot with my fingers, not a release – I kept all four fingers under the nock, on the advice of Larry, the local archery guru. I also let Larry talk me into taking the sights off my bow and shooting instinctively. Instinctive archery is a lot like instinctive shotgunning. I remember looking at a patch of fur behind this buck’s shoulder, releasing, and seeing the arrow magically appear right where I was looking. It was very zen, just like wingshooting.

A couple of years ago I took my old Cobra in to the local archery store and asked the guys behind the counter if it was still shootable. They were afraid to even put it on a bow press, and suggested I retire it and buy a new bow. Given that new bows cost the price of a pretty nice shotgun and I have since discovered that red meat comes from the sky in the form of ducks and geese, I took the bow home and permanently retired it. I haven’t bowhunted since 1989 and don’t plan to start again as long as deer season is set during pheasant and waterfowl seasons. Nevertheless shooting a deer at close range with a bow – even a basket-racked 8 — is still the biggest thrill I’ve ever felt in the outdoors.

*That is one of several things that is better today than it was in 1988.