Teal are among my favorite ducks. They’re tasty and not too bright, a great combination for me, but not so... 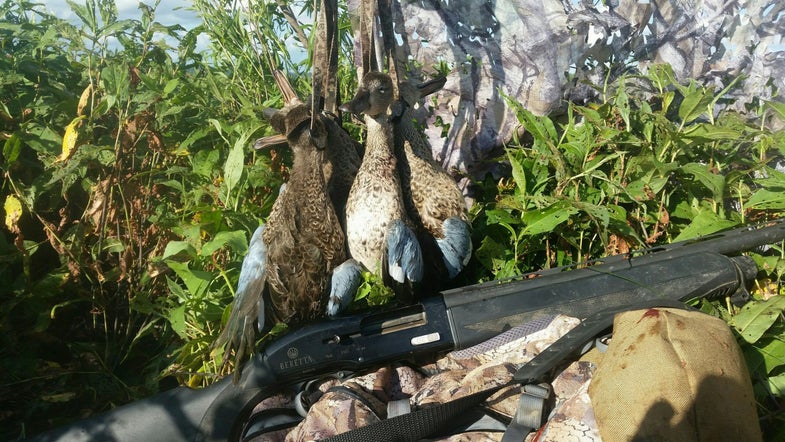 Teal are among my favorite ducks. They’re tasty and not too bright, a great combination for me, but not so great for them. September teal hunts are a great way to start the waterfowling season.

I have been reminded of a couple of things about teal this past week: First, unpredictability is the teal’s main defensive weapon so you have to keep your hands on your gun and your eyes over the decoys all the time. Teal come in low, unannounced, and under your radar, and they are in and out of the decoys in a flash. Moreover, they are immune to whatever law of aerodynamics requires all other ducks to land into the wind. The other morning we had teal landing in the decoys from upwind, downwind, and crosswind so we really had to be alert.

Teal are not fast. If you actually see them come in and get ready, they’re not that hard to hit. It’s that randomness that makes them seem fast. If you have your decoys set right (close), you’ll be able to see every detail on the birds when they come in. Focus on the eye or the bill and you’ll find teal aren’t really that hard to hit, nor are they as speedy as people say.

You can give yourself an edge, too, by choosing an IC choke and smaller shot. My gun has a Rob Roberts T2 in it, which is about Light Modified or just a shade tighter than IC in it, and I’ve shot my birds with HeviTeal 6s and TealSteel 5s this season to good effect. I’ve also shot lots of teal with 2s and never felt handicapped, but teal are small and usually shot up close, and the pattern density of small pellets is your friend.

Teal fly in tight bunches. It’s all too possible to rain several birds out of a bunch with one shot. When teal cross in front of the decoys, I always try to pick the last bird to minimize the chance of hitting more than one, or I pick one on the edge of the bunch if they’re coming at me. I relearned this lesson this year when I tried to shoot a bird on the outside of a tight flock and I killed that one and knocked down two others, which means half of my limit was done right there. Some people might think shooting them three at a time is a good idea, but l wasn’t pleased. Teal hunting is too much fun to end it that quickly.