My younger son sent me this video of the Burgess folding shotgun, a gun of which I had been, until... 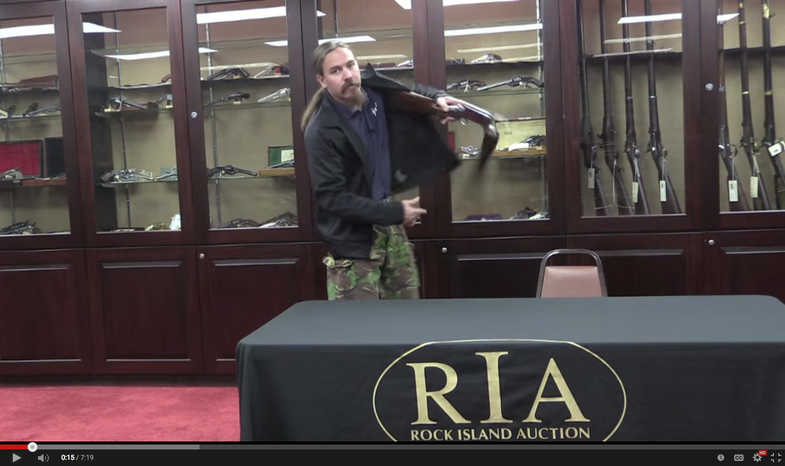 My younger son sent me this video of the Burgess folding shotgun, a gun of which I had been, until now, completely ignorant. It’s an early slide action that could be carried concealed, folded in half, and fully loaded with six shells. Andrew Burgess of Buffalo, New York, designed the gun and produced it from 1894 to 1899. Along with figuring out how to make a folding shotgun that locked up instantly, Burgess had to invent his way around the already-patented sliding forearm of other pump guns.

What he came up with was a sliding grip. Instead of working the action with your front hand, you pull back with your trigger hand to cycle the gun. Apparently, it was very fast. One of Burgess’ salesmen could hit six hand-thrown clays in the air with the gun.

That same salesman walked into Theodore Roosevelt’s office when TR was a New York city police commissioner.* He pulled a Burgess shotgun out from its special holster under his coat, and shot six blanks into the ceiling. It’s hard to imagine that happening today in any politician’s office, but this was the 1890s and Teddy Roosevelt we’re talking about. Instead of diving behind his desk, TR beamed, of course, and ordered 100 Burgess folders for the city’s prison guards.

The Burgess, innovative and compact as it was, lost out in the marketplace to the much more popular Winchester 1893 and 1897 pumps. Nevertheless, just to be sure they won the slide action wars, Winchester bought Burgess out and discontinued his gun. There weren’t a huge number of Burgess guns made, but there are still some around, and they command prices of several thousand dollars.

The greatest mystery of the Burgess folding shotgun, however, is: why hasn’t someone put it in a western movie yet?