The grin on my host Nate’s face on this early-season goose hunt is the same as the one I wore... 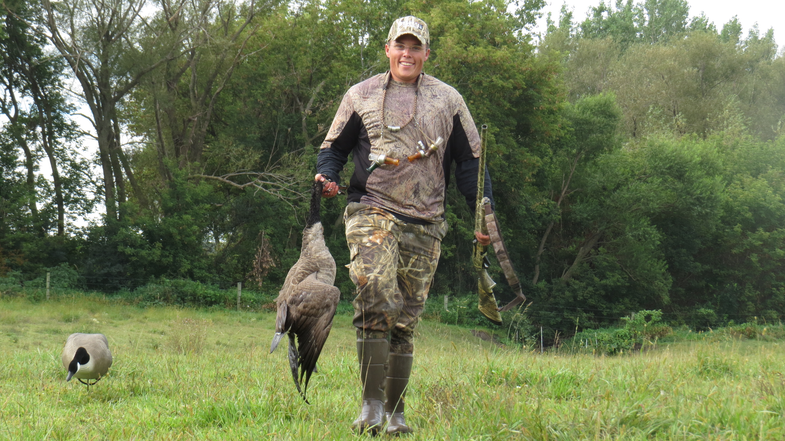 Returning back to the blind after a successful goose chase.. Phil Bourjaily
SHARE

The grin on my host Nate’s face on this early-season goose hunt is the same as the one I wore that morning: the realization that it’s goose season now, and will be, more or less, until mid-January where I live, and mid-February in some places. Life is good.

Nate is also happy because he has rounded up the goose in his hand, which was one of several we knocked out of a flock of sixty or so that came sailing into the loafing pond we were guarding. Retrieving it was an effort.
Long story boiled down:

It dove to escape the dog – the first time I have ever seen a goose dive – and swam off underwater.

A group of five geese landed on the far side of the pond. When we counted again, there were six. The underwater goose had joined them.

Nate took the dog and went around after them. The five flushed and, while free to fly in any one of 360 degrees, made the extremely poor, even fatal, decision to plot a course directly over our blinds. In the meantime the sixth disappeared, we suspected into the vegetation at the pond’s edge.

Aggressive cattle and an electric fence deterred the dog. Nate looked for a long time. He came up with nothing, so they returned to blinds.

About ten minutes after they returned, Vista Outdoors’ Jake Edson said “I can see it!” and sure enough, if you looked really hard, you could see a goose head periscoping up out of grass at the pond’s edge. Nate and the dog went back. The dog wanted no part of looking for a goose in the corner of the pond where it just got nicked by an electric fence, so Nate got down on his hands and knees and rooted around until he found the goose.

And, while that was a pretty good wild goose chase, the best I ever saw was almost twenty years ago in northeast Ohio. We were hunting a long cornfield with a strip chopped in the middle out in the exurbs. Someone winged a goose and it ran off into the corn. My friend Frank ran after it. After a little while we could see the goose running down the hard road that bounded the field. A few seconds later, here came Frank after it.

As Frank tells the story, the goose turned down the first driveway it came to and ran into a garage. Frank, who had lived in the area all his life and knew everyone, didn’t hesitate to run in after it. The homeonwer’s dog ran into the garage after Frank. Frank got a hold of the goose about the time the dog got hold of him. The homeowner, who was quite elderly and hard of hearing, nonetheless heard Frank yelling and looked into the garage.

“Is Rufus bothering you, Frank?” she asked.

Eventually Mrs. DeLuca got Frank and Rufus disentangled, and Frank came back with the goose – but without the seat of his pants.