Weekend before last I was in South Dakota, freezing mostly, and also hunting pheasants and sharptails.* And, I did something... 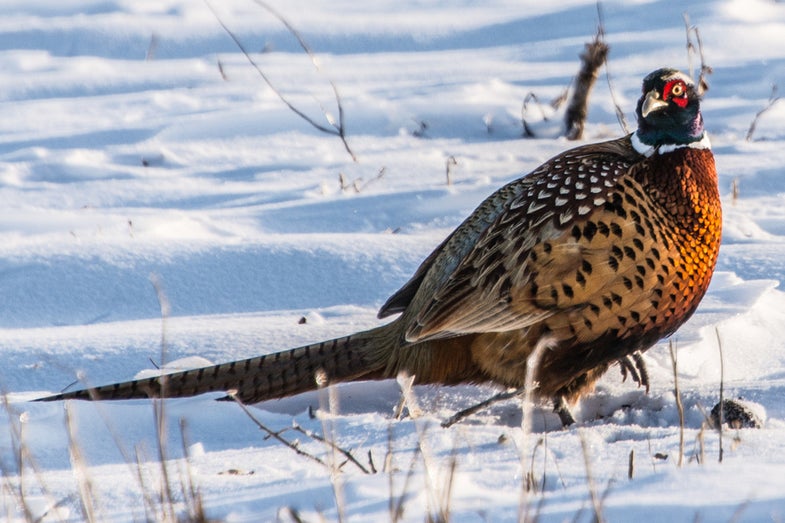 Weekend before last I was in South Dakota, freezing mostly, and also hunting pheasants and sharptails.*

And, I did something I’ve already done a couple of times at home this season: I let one go. I’m getting softer hearted as I get older, and I was never a bloodthirsty killer to begin with. I am finding that sometimes I just like to watch them fly away. Besides, it’s been a good year so far. I’ve shot some birds, seen quite a few, and there’s a lot of season to go. I am not worried about where my next pheasant is coming from.

Anyway, I was hunting at a place called Brown’s Hunting Ranch, which is a terrific operation and offers hunts for wild birds only. I have been to other South Dakota pheasant places, and they depress me. Not Brown’s. We walked a long way for our birds.

One afternoon we made a loop around a cattail slough pushing tons of pheasants in front of us. Most flushed wild but not all of them, and I was one short of a limit by the time we were almost back to where we started. At the end of the slough the cattails petered out into a series of clumps sticking up out of short grass, which was mostly flattened under snow. The dogs were elsewhere. Mark, one of the guides, saw the roosters first.
“Get up here,” he said. “I see half a dozen roosters headed for that next bunch of cattails.” I walked up. One of the half dozen was still out in the open, standing there. These were all wild birds, and you don’t see them do that very often.

“Walk toward him and shoot him when he flies,” said Mark.

I didn’t really want to shoot him, but it seemed to matter to Mark. I took a few steps. The pheasant regarded me stupidly. He was also very pretty against the snow.

“Mark, I’m not shooting this bird,” I said. “I’ll go through those cattails and see if there are any others in there though.”

As I walked closer the rooster in the open hunkered down and started slinking, perhaps unaware of how easy he was to see in the snow. I walked closer. He didn’t flush. It occurred to me he might be a cripple that needed mercy killing. “Maybe he’s got a broken wing, Mark. Try to flush him. If he can’t fly, I’ll shoot.”

Mark ran at the bird. There was nothing wrong with it. It flew and gave me an easy 15 yard crossing shot. It was also close enough that I could see the low afternoon sun shining off the copper feathers. One of the few things I dislike about upland hunting is that you don’t get to look at the birds for very long before you start shooting so I enjoyed watching this one go. Then I walked into the cattail clump. The other birds were gone. I unloaded my gun and turned for the truck.

I was a little concerned that Mark might be frustrated with me for not shooting. Instead, he gave me a fist bump. “Most of my hunters would have ground-pounded that one,” he said. “It’s not always about killing them.”

*I was also getting my first look at a new shotgun from Benelli about which I am sworn to secrecy until SHOT Show. I can say only that it’s very unusual, and that I liked it a lot.