Starting around this time of the year, many of the northern clear-water fisheries fall victim to a cyclical algae bloom.... 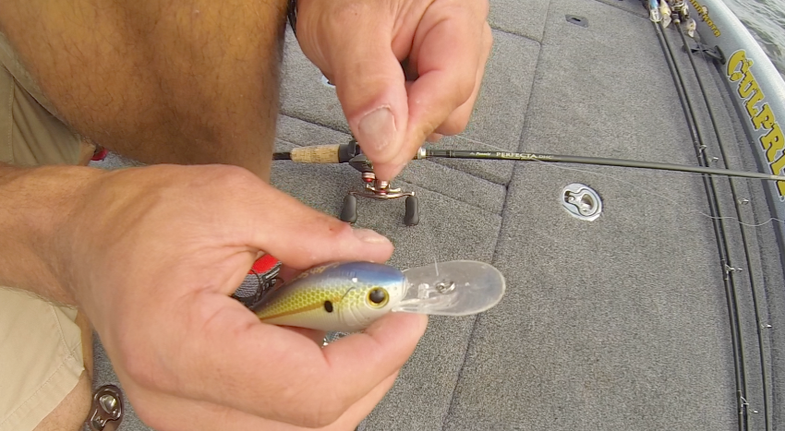 Starting around this time of the year, many of the northern clear-water fisheries fall victim to a cyclical algae bloom. This bloom—whether it’s accompanied by an additional turnover later or not—tends to put the bass and bass fishermen in flux for a while. Most of the time, anglers don’t even know it’s going on. They show up at the lake with their regular arsenal rigged, then have to switch gears to get a few bites. Those that try and press on with the same clear-water baits and presentations, like I have numerous times, usually learn a hard lesson. That hard lesson has taught me to always have a puke-colored water backup plan.

To fight this fight, I always have one or two rods rigged with baits I know are more likely to produce in this off-color water. When fishing up north, I’m also the kind of a guy that likes to mix it up between smallmouth and largemouth during the same day. So my smallmouth bait of choice during the bloom is a rattling mid-depth crankbait, usually shad colored with some orange or chartreuse highlights. My theory is that many of the deep smallmouths move shallower with the off-colored water, and many of the resident shallow smallmouth have a hard time seeing the standard small finesse baits that usually catch them. So what I’ll do is continuously cast and rip the crankbait off of mid-depth grass lines or pound the bottom on rocky areas adjacent to areas that hold both deep and shallow smallies. This sounds like a vague plan, but I remember a few specific instances where I looked like a hero when nobody else was able to adjust. And in terms of the largemouth, I’ll break out my Florida mat flippin’ rod rigged with a big weight and punch-style compact plastic. I’ll look for vegetation and/or debris mats that have blown in super shallow and target them by punching the thickest areas. My theory here is that as largemouths start to lose healthy grass in open water and can’t cruise for shallow sight food as effectively, they set up camp in secure, but temporary mats to wait out the bloom.

Overall, I find the approach to this northern bloom fishing eerily similar to how I find myself approaching early spring bass fishing down South, when the water has some dingy color from spring rains. Of course there are some subtle differences, but the bigger baits and power approaches definitely provide a stark contrast to what you’ll usually find the bulk of northern anglers doing during the clear-water portions of the year. The thing is, now I look at the blooms as a refreshing opportunity to take advantage of. It provides a change in gears—one that an experienced angler could use to his or her benefit—especially if the summer heat began to make them bored as they slow dragged the same deep water humps.